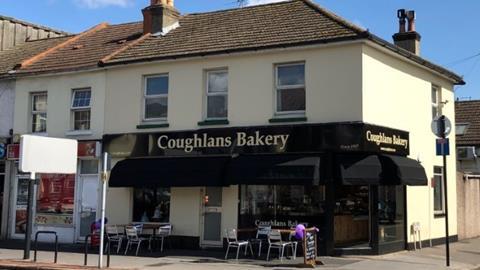 South London bakery chain Coughlans has launched a pay it forward scheme and surplus food centre to help feed those in need in the local area.

As part of its work, the bakery, which has 26 shops in the south London and south east area, has rolled out a post-it note campaign. Customers can pay £5 for a post-it note which is stuck to the window of the Coughlans shop it was bought in and can be redeemed by the person who picks it up.

Director Sean Coughlan said he and his wife developed the idea following on from Marcus Rashford’s free school meals campaign.

“I know that there are children in our area who are going hungry and need that meal every day. There has been a massive response to what we are doing with the post-it notes, particularly in the school half term holiday. People in the community want to help, but they need a way to do it,” Coughlan said.

The business has also set up a food centre in Coulsdon, Surrey, where local people can pick up food that it has not sold in its shops during the day, working with local taxi company Evo.

Evo picks up the food from six shops and has donated a room to be used as a hub in its premises. The centre is open six days a week from 5pm to 7pm.

It is also working with four charities for homeless people, donating leftover food from its other stores, all of which have remained open during the second lockdown.

“We have all gone through a lot in the last few months, and the only way to carry on is to keep pressing ahead and be positive.”