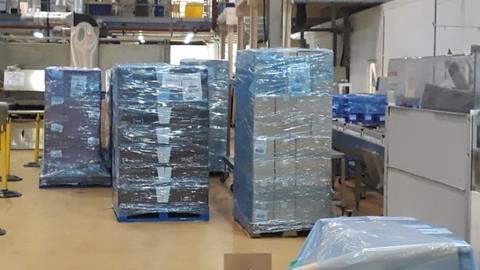 Inside one of BBF’s manufacturing sites

Cake manufacturer BBF has pledged to reduce its food waste as part of its official commitment to the Food Waste Reduction Roadmap.

The Roadmap was unveiled in 2018 by the Waste & Resources Action Programme (WRAP) and IGD, with signatories pledging to halve food waste by 2030. It comprises a three-part strategy:

By committing to the programme, BBF has agreed to take targeted action to reduce food waste and will be setting new milestones across its own operations, while encouraging suppliers and customers to do the same. It will also track and report regularly on its progress to ensure its actions are achieving measurable impact.

As part of this, it has already implemented the segregation of food waste from general waste, which it said was contributing to at least a 20% reduction in waste within 12 months.

“The link between food waste and climate change is something we can no longer ignore. Globally, around a third of all food is wasted and the IPCC estimated that food waste contributed nearly 10% of all man-made greenhouse gas emissions between 2010 and 2016,” said WRAP director Peter Maddox.

“Having the support of companies like BBF is crucial in helping to mitigate against this problem through its own actions, and by engaging with its client base.”

Jonathan Lill, BBF CEO, added that the company was proud to be involved and looked forward to working with the team, as well as suppliers and customers, as part of the “fantastic scheme”.