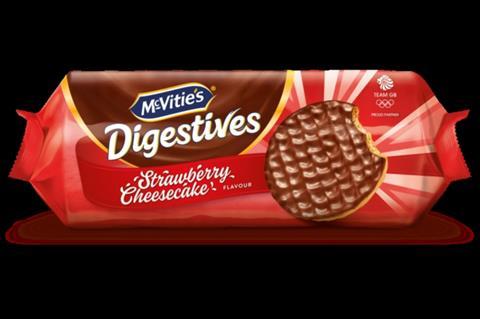 Pladis has given its McVitie’s Chocolate Digestives and Hobnobs brands a ‘dessert-inspired’ makeover.

Pladis said the NPD was geared towards attracting younger shoppers “aged between 25 and 40 to the biscuit aisle”, as well as “driving purchasing frequency among existing McVitie’s shoppers”.

Emma Stowers, brand director for McVitie’s at Pladis UK&I, described both brands as “proving more popular than ever, as shoppers enjoyed many more ‘hot drink moments’ at home” during 2020.

“Innovation is crucial when it comes to keeping shoppers engaged with what’s on offer in the biscuit aisle,” Stowers said.

“This is particularly important for younger shoppers who are increasingly seeking unusual and exciting flavour experiences.

“We’ve got a track record of success with introducing new formats and flavours to our bestsellers and we can’t wait to see what shoppers think of these exciting, new additions,” she added.

The latest British Icons range is being sold in Asda for £1.59 per pack and will roll out across other major retailers – including Sainsbury’s, Tesco and Morrisons – as well as in convenience and wholesale from January.