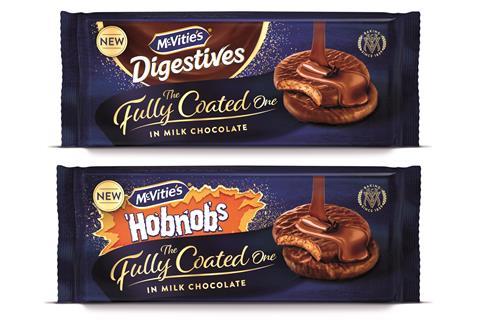 Pladis is looking to tap into demand for premium treats with the launch of fully coated Digestives and Hobnobs.

Dubbed ‘The Fully Coated One’, the NPD sees the McVitie’s core lines enrobed in milk chocolate. They’ll be available from January across supermarkets, convenience retailers and wholesale with an rsp of £1.79.

The move elevates the biscuits from everyday treats to special ones, said Pladis. It added that the NPD would help retailers unlock incremental sales and encourage shoppers to trade up, thereby adding value to the category.

“With the launch of our new, premium collection, we’re building on the momentum we’ve generated for the two brands – which were up by 35% between March and September this year – and delivering an extra special version of the biscuits consumers already love,” said Emma Stowers, brand director for McVitie’s at Pladis UK&I.

“We’re confident the McVitie’s ‘Fully Coated’ range will be well-received in the market, particularly because this time, we’re making two of our best-loved biscuits the focus. Given current circumstances, we also expect more consumers to prioritise affordable, at-home treats as we move into 2021.”

McVitie’s has rolled out several new variants of Digestives and Hobnobs throughout the year, including the limited-edition dessert-inspired British icons range, which included strawberry cheesecake and sticky toffee pudding variants, as well as VIBs. The latter was highlighted by British Baker as one of the top bakery launches of 2020.