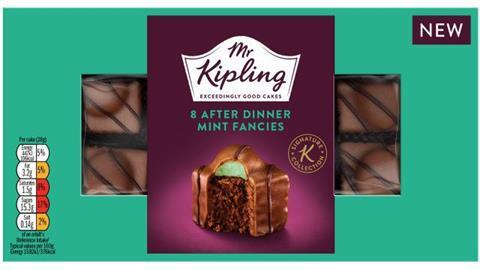 Premier said Mr Kipling revenue had risen 4% year on year, with the brand benefiting from further TV advertising and the launch of the premium Signature range that included Dinner Mint Fancies.

In the second half of the year, the company rolled out mini Mr Kipling Mince Pies, Fruit pies and Bakewells after Premier boosted its cake production capability by reconfiguring an existing manufacturing line at its Stoke bakery.

“This has vastly improved the flexibility of different cake sizes and types and facilitates the development of more new products which closely match consumer trends,” stated the company.

Cadbury cake sales had risen almost 8% year on year and had been boosted by the introduction of Cadbury cake slices and Easter ranges including Cadbury Crème Egg Choc cakes.

NPD under both brands had helped the company secure increased distribution, Premier reported.

Over the period, Premier also launched flapjacks under its Plantastic brand, later extending the brand with Dessert Grain pots.

A decline in sales of non-branded sweet treats was a result of the business leaving lower-margin contracts in all-year-round cake ranges, but had been partly offset by some contract wins in seasonal cake in the first half of the year.

Last year, Premier launched home baking products including Mr Kipling mixes, and the company said sales had “gone through the roof” as a result of the home-baking boom during lockdown.

CEO Alex Whitehouse added that sales of flour had doubled during lockdown, with the company’s flour mill becoming a 24/7 operation.

While Mr Kipling sales had risen in Australia and the US, Premier admitted its international business had had a disappointing year, with total revenues down 19%.

The company said it had reviewed its international strategy, and a new head of international had been appointed to lead a fresh new approach that would include a focus on certain markets.

Total group revenue across the Premier Foods business rose 2.8%, with trading profit up 3.2%.

“We have now grown group revenues, trading profit and adjusted earnings for each of the last three years, driven by our successful branded growth model of delivering insightful new product innovation, together with emotionally engaging advertising and building strategic retailer partnerships,” said Whitehouse.

“A good example of the growth model delivering results is our biggest brand Mr Kipling which, two years after a major relaunch, achieved its highest-ever annual sales. Most of our other major brands also grew revenues in the year. Additionally, our cost savings programme is now expected to deliver ahead of its original £5m target over the next two years.”

Whitehouse added that the company planned to increase consumer marketing investment for the coming year, and that revenues in the first quarter of FY20/21 were expected to be around 20% ahead of the same quarter a year ago.