Mitigating undesirable NFCs such as acrylamide is essential to providing safe and palatable baked goods, but can be challenging. So, what are the best methods of ensuring this? Dr Clare Hazel, head of Premier Analytical Services, takes a closer look. 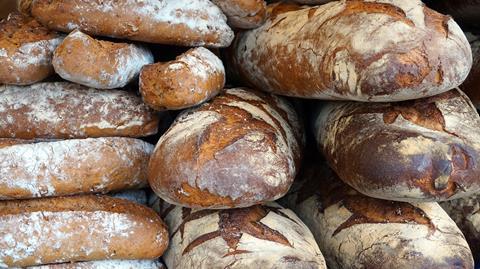 We can all enjoy foods without needing to know the science, but it is reassuring to appreciate that the knowledge of bakers and their industry partners has led to the reduction of contaminants formed in the baking process.

From a scientific viewpoint, bakery dough consists of several phases, such as gases, lipids and starches, within a continuous matrix of gluten and water. The finished breads, cakes and biscuits that we love owe their sensory properties and other attributes to the complex interactions of the raw materials, the proportions, characteristics, the dough processing method and then the final heat treatment.

While baking may have prehistoric origins, and both the main processes used to produce ingredients and the baking itself may have been understood for some time, it took many years to realise that some undesirable chemicals may also be formed. Consequently, the control of food product quality (sensory and nutrition) and mitigation of undesirable neo(new)formed contaminants (NFCs) is important but also can be challenging. The European Commission has initiated numerous activities to monitor and identify health effects, and has proposed “mitigation toolboxes” to help food manufacturers with their processes and suggested some ways to measure NFCs in foods. Here, we examine three key NFCs and how they can be successfully managed.

Acrylamide at a glance

Acrylamide is recognised as a probable carcinogen.

Acrylamide has been monitored in a wide range of retail products. Figure 2 (below) shows recent UK levels in retail samples of soft bread (wheat-based) and biscuits (including crackers, crispbreads and wafers).

Within the product, acrylamide is predominantly formed in areas of low moisture that have been subjected to high temperatures. This is reflected in the large differences in mean acrylamide levels for bread and biscuits (Figure 2). As acrylamide is formed in the outer crusts of bread, the overall level is diluted by the relatively large volume of crumb where it is not formed. 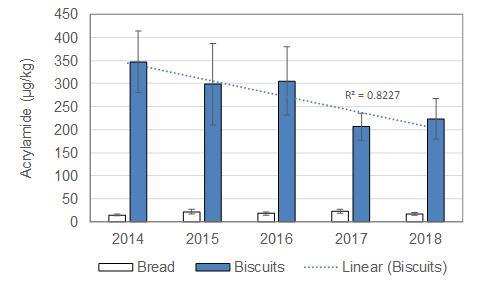 Lower levels of acrylamide can be seen in UK plant breads when compared to those in the EU. Looking at this in more depth, it is known that most plant bread in the UK is produced from wheat by the Chorleywood bread process (CBP), while the processes and raw materials used in the EU differ. Studies have shown that yeast preferentially uses the amino acid asparagine, resulting in less asparagine being present and thus less acrylamide. Minimising ingredients such as ammonium-based raising agents, high fructose levels, ginger or fruit in biscuits, or indeed adding asparaginase, calcium and magnesium can also help avoid formation of acrylamide.

The changes made by the baking sector have driven a reduction of acrylamide in biscuits, crackers and crispbreads by about 9% in the four-year period from 2014 to 20181. However, the reduction of acrylamide in processes not utilising yeast can be challenging without compromising the unique flavour and other characteristics of some established products. Furthermore, biscuit dough is typically of lower moisture compared with bread dough, meaning asparaginase may be less effective.

To support the bakers, other industries can help by limiting the use of nitrogen fertilisation on plants (cereals) or by selective breeding to produce wheat with reduced asparagine.

As yet, there are no maximum limits, but regulators have established mitigation measures, benchmark levels and analytical performance criteria, so that laboratories can help by applying consistent testing2.

Table 1 (below) shows the progression of the EU regulatory system for controlling acrylamide in selected foods.

Furan/alkyl furans at a glance

Furan is recognised as a possible human carcinogen. It is a known flavour volatile that is found in a wide variety of foods, including canned and jarred products, bread and rolls, coffee (especially roasted), raw pasta, breakfast cereals, fine bakery wares and popcorn.

Furans can be formed when polyunsaturated fatty acids, carbohydrates, amino acids, ascorbic acid, and carotenoids are subjected to heat. Consequently, as these nutrients are common, many foods that are heated will form low amounts of furan, but as the furan is volatile, exposure to consumers depend on how much is retained in the food. Alkyl furans are believed to be formed from the same precursors as furan. 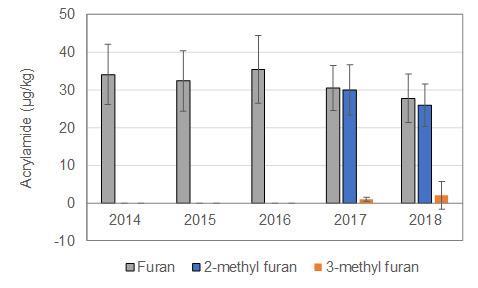 Figure 3. Furans in UK retail samples of ’biscuits’ including crackers, crispbreads, wafers. (2- and 3-methyl furan were not monitored before 2017; FSA data)

Compared with coffee, which can attain relatively high amounts of furan (mg/kg), levels in biscuits, crackers, crispbreads and wafers appear to be significantly lower (Figure 3). Interestingly, the formation of furan, pentyl furan and the key sensory marker furfural have been demonstrated in theoretical models. So far, data on the occurrence of furans in cake is not available.

No specific ways to control the formation on an industrial scale have been identified so far. However, reheating in open containers in the domestic environment may result in some reduction of furan by volatile losses. Also, authorities are yet to set limits and official standard test methods (e.g., CEN, ISO) available for the combined analysis of furan and alkyl furans in foods are not yet available.

Many food business operators, including the baking industry, have a keen interest in levels of Monochloropropanediol esters (3-MCPDE), in the ingredients and finished products. These contaminants were originally discovered in acid-hydrolysed vegetable proteins and the first occurrence in foods was reported for milk from goats and humans; the discovery of MCPDE and Glycidyl esters (GE) in wider foods was subsequently linked to formation in refined edible oils, and there is now some evidence for generation in cereal products during toasting.

Considered to be a health risk, 3-MCPD and esters have ’tolerable daily intakes’ assigned and limits are covered by legislation, the latest update being applied from 1st January 20213. There are agreed harmonised test methods to measure total ester bound MCPDs and glycidol in fats and oils based. However, robust methods for multi-ingredient composite foods are not yet widely available.

The food industry as a whole is working on ways to reduce the formation of these compounds. Activities include cultivation of breeds with low levels of the enzyme lipase, gentle handling to minimise the release of lipase during harvesting and refining, minimising the use of agriculture and processing treatments that contain chlorine and also changes to the deodorisation process and related temperature controls..

In practice, it will be impossible to completely avoid the generation of NFCs in bakery products, while maintaining important quality and safety requirements in their creation. However, significant progress has been achieved by the food industry and academia to identify viable measures to mitigate these contaminants to “as low as reasonably achievable”.

Should you need help with testing, advice on tests and their frequency regarding potential contaminants in baking, PAS (Premier Analytical Services) will be happy to support you. Contact PAS on email: paslabs@premierfoods.co.uk or via the web on PAS.co.uk .

References are provided in our main paper found in this link