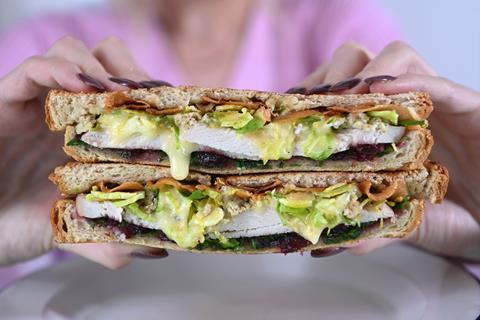 Brits will scoff 201 million festive sandwiches this year, spending £673m in the process, according to research conducted by Censuswide.

The survey of 2,005 consumers, commissioned by American Express, also found British consumers are set to polish off an average of six festive sandwiches each this year, and more than half (51%) of respondents to the study said they wanted to eat them all year round.

Almost half (48%) of those polled said they’d eat a festive sandwich for breakfast while a third (33%) said they’d be tempted to choose one over a traditional Christmas dinner.

The study showed turkey to be the most popular festive sandwich ingredient, with 65% of respondents favouring the traditional Christmas staple. The same percentage said they liked trying new ingredients, with crisps (29%) the most popular choice in the list of more niche fillings also including onion bhajis (15%), mince pies (12%) and leftover Christmas pudding (10%).

Of the collective £673m to be spent on festive sandwiches this year, almost a third (31%) will be going to small, independent businesses, the survey found.

“Small businesses are at the heart of our local communities and it’s really important that we all support them throughout the festive season, and beyond,” said Dan Edelman, general manager, UK merchant services at American Express, which is championing Small Business Saturday, taking place this year on 4 December. “We’re urging everyone to shop small,” Edelman added.

Retailers and coffee shops have got creative with their Christmas sandwich options with bacon mac & cheese, pigs in blankets and beef wellington among the new flavours for this year.