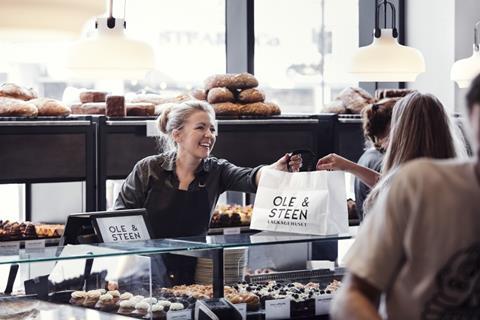 Danish bakery Ole & Steen is gearing up to open its first site in Windsor on Thursday 4 August.

Located in Windsor Yards, the bakery will be open seven days a week from 7:30am to 7pm weekdays and Saturdays, meaning visitors and locals can pop in store for a baked treat.

The new site, which represents the bakery’s 21st in the UK, is described as ‘spacious and pet friendly’, with seating for a total of 82 people inside and outside.

Ole & Steen’s full menu will be on offer which features fresh Danish bread including chia, carrot and seeded rye loaves, sourdough loaves and Skagen – a wholegrain loaf with wheat, wholegrain wheat and rye flour, covered in chia, durum and sunflower seeds. Sweet treats such as the cinnamon social will also be available alongside a breakfast and lunch menu featuring avocado on toast, smoked salmon rolls, ham & cheese toasties and more.

To mark the opening, Ole & Steen will hide bunches of flowers in streets and parks around the new bakery. Anyone who finds the flowers, will also receive a series of lucky envelopes containing various prizes including a ‘Guld Kort’ (gold card) worth £250, 10x best-selling socials and 20x free hot drinks.

“We hope to integrate ourselves into the local Windsor neighbourhood and boost job opportunities in the area,” said Ole & Steen managing director Lee Nixon.

“We pride ourselves on our true Scandinavian feel and authentic, high quality, delicious baked goods which we are now bringing to the southeast.”

It comes shortly after the business opened its 20th site on Battersea’s Northcote Road in London.

The business has expanded at pace in the past couple of years. It opened its first site in the UK in late 2016 rising to 13 at the start of 2021 and a further eight since then. This has seen it climb up the rankings of British Baker’s Bakery Market Report, which tracks businesses that sell baked goods as a primary element of their food offering in a non-supermarket retail, food-to-go or eat-in format. Ole & Steen entered at number 74 in 2021 and climbing to 56 this year.