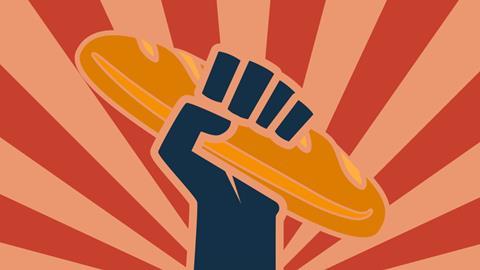 Bakery technology: you say you want a revolution?

When it comes to the basics of bakery equipment, there have been very few revolutionary developments.

There have, of course, been big improvements in areas such as control systems and efficiency but – as Campden BRI pointed out in a recent article in this magazine – if you were to drop a Victorian baker into a modern-day bakery they would probably understand what each piece of equipment did.

That’s not to say there isn’t technology out there that could transform the way some industrial bakeries operate, but until now, adoption has been limited.

So, what are these technologies, what potential do they have to change plant baking, and why – in some cases – isn’t this happening in the UK industry just yet?

One system that has attracted attention over the years is vacuum cooling as an alternative to the more traditional methods employed when goods leave the oven.

According to vacuum equipment supplier Weber Cooling, this method can improve the structure of bread, generate more volume, ensure a crispier crust and result
in longer shelf life. And, because of how liquids behave in a vacuum, it even reduces baking time.

Here’s how it works:

In a standard baking situation, baked goods are cooled by convection on racks or perhaps a cooling spiral tower. This requires time, space for air to move, and energy to pump and possibly chill air to enable faster cooling. With vacuum cooling, however, batches of baked goods are placed in a chamber, and the air is removed using a vacuum pump. This reduces the pressure in the chamber, which makes a big difference to how the liquid in the baked good behaves.

At standard air pressure, water boils at 100°C, while at the sort of pressures inside a vacuum chamber, that boiling point falls to 30°C. This means that the water in the baked good, which is still hot from the oven, boils and is released as steam, taking heat with it.

Effectively, this boiling and evaporation performs the same function as part of the baking time – enabling the time a product needs to be in the oven to be reduced by around a quarter.

Moreover, the benefits don’t end there, according to Patrick Duss, executive director of the Netherlands-based Vacuum Cooling & Baking Company, and one of the pioneers of the technology.

“The vacuum cooling and baking process brings a significant quality improvement to the product, with extended volume, and better structure and texture.”

“The vacuum cooling and baking process brings a significant quality improvement to the product, with extended volume, and better structure and texture,” he tells British Baker, adding that because of higher gelatinisation of starch in the vacuum process, the product is able to bind more moisture.

While releasing steam in baked goods has advantages, it can also cause problems in certain types of product, warns Gary Tucker, technical development ambassador at Campden BRI.

“The main advantage is in the faster rates of cooling that can be achieved because of the amount of energy required by the water as it converts to steam. This can cut cooling times to less than a third of the original time for atmospheric cooling.

He adds that the sudden release of steam can also aid production of laminated baked goods as it causes the layers in products to separate as the steam finds its way out.

Duss admits that adoption of vacuum cooling requires an open mind about the baking process and a willingness to adapt.

“Only when the optimal combination is obtained between the recipe, the baking curves, technique and technology, will the results be maximised,” he says, adding that the Vacuum Cooling & Baking Company has experts ready to support customers on the initial planning, as well as throughout the entire production process.

When developing recipes using vacuum cooling as the technology, it will be essential to ensure the final product has the correct water content, says Tucker.

“This might be for texture purposes or to control bacterial or mould growth over shelf life. The recipe and process have to be managed together.”

Duss says there are economic benefits to using vacuum cooling, with the reduction in baking time boosting throughput and preventing bottlenecks at ovens.

And although the adoption of vacuum cooling requires a relatively high initial outlay – which is one of the key reasons for its low adoption – businesses can expect a return on investment within between one and three years, he claims.

It can also mean better use of space in a bakery, with vacuum cooling equipment having a much smaller footprint than a spiral cooling tower and the reduction in cooking time enabling businesses to use shorter ovens.

Tucker adds that the big issue in an industrial baking process is linking up the vacuum cooling, which is a batch technology, to a continuous oven and packing line.

“The ideal solution is a continuous vacuum cooler with the same throughput to the oven and packing lines,” he says, adding that the canning industry uses continuous cooker-coolers for cylindrical metal can processing globally.

“The challenge for the baking industry is how to design a similar entry and exit system for the product. Holding pressure through a transfer valve is much easier than holding a vacuum. If it is possible to crack this, it will open up vacuum cooling to industrial bakeries.”

Like vacuum coolers, radio frequency heating technology has been available to bakery firms for decades.

Radio frequency heating (also referred to as solid-state heating) uses an amplifier to transmit radio wave energy to heat an object in a closed cavity, such as an oven. While similar in principle to a microwave oven, the power level and frequency of a radio frequency oven can be adjusted for much more precise heating than a microwave oven.

The technology has been more widely adopted by bakery businesses than vacuum cooling, although its use in the industry has been limited to biscuit and cracker producers, who use it to prevent the cracking that can take place soon after manufacture. Known as checking, this is caused by stresses from water that evaporates slowly from the biscuit. This can initiate cracks within the biscuit and can take place any time after the biscuit has hardened.

“To avoid this, water should be removed during the baking and cooling process while the structure is able to withstand voids opening up,” explains Gary Tucker, technical development ambassador at Campden BRI.

“Radio frequency baking enables oven throughputs to be increased as it keeps the rate of evaporation high once the biscuit has exited the oven.”

Tucker adds that radio frequency is suited to heating up water, but will not provide the colour or flavour development that is desirable in baked products. “Radio frequency will increase the temperature of a high-water food product quickly but without colouration,” he says, explaining it is always used in combination with conventional heating, which increases the cost of equipment and operation.

Tucker adds that radio frequency heating could have benefits in baking of products that brown excessively, such as those high with sugar.

An online 3D X-ray technology to detect quality and safety issues in a range of baked products has been brought to market by Italian business Biometic.

Holes in bread can cause problems on sandwich filling lines when mayonnaise, for example, seeps through the bread’s holes and onto the conveyor belt – creating a potential hygiene issue.

“We assessed the Mito scanner to create a 3D image of a bread loaf at processing speeds of 15 metres/minute. It revealed areas containing large holes due to the fermentation process.

“Combined with an auto-reject algorithm, the process can sort between acceptable and low-quality products in real time on a production line and can operate at speeds up to 40 metres/minute.”

What prevents adoption of new technology?

Stanley Cauvain of bakery consultants BakeTran explains why the baking industry can be slow to adopt new technology:

This situation is gradually changing. However, that rate of change would be greater if bakers looked outside their own industry for ideas and potential solutions.