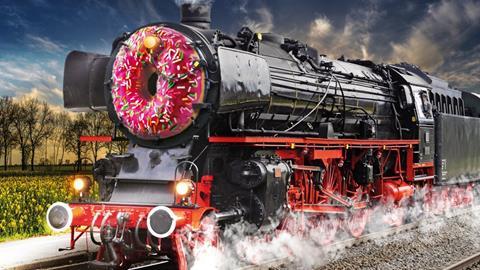 Steaming ahead: the future of doughnuts?

Deep-fried doughnuts don’t exactly scream healthy, and the industry is looking at new ways to produce the treats. Could consumers learn to love baked – and even steamed – versions?

Government targets and rising obesity rates mean it is full steam ahead when it comes to making bakery items healthier. And doughnuts are among products in the firing line.

Problem is, it’s hard to make something deep-fried that much healthier. That’s why some bakery suppliers and doughnut specialists are turning to alternative cooking methods, such as steaming and baking, for help. But will the nation approve of these reinvented creations?

“Baked doughnuts are gaining traction with consumers because they can be perceived as ‘healthier’ than fried, since they do not use that much oil in the baking process,” says Jacqui Passmore, marketing manager UK and Ireland, Dawn Foods.

Dum Dum Donutterie, which 10 has shops in England, claims to be the world’s first baked doughnut and doughnut/croissant hybrid brand. Its creations, which include The Zebra ‘Cro’ with plain and chocolate croissant dough, boast ‘significantly lower fat’ than its competitors thanks to a patented patisserie-based baking process.

However, Passmore warns that baking doughnuts can bring changes.

“The finished products will have a different texture and density,” she notes. “Baked doughnuts have a thicker crust and cake or bun-like texture.”

CSM Bakery Solutions has tried to combat textural changes with a patented solution that offers a reduced-fat doughnut with the crisp outside consumers expect.

“The technology mimics classic frying to give the taste and texture of a fried product, with a thin crust and moist interior, by being blanched in a small amount of sunflower oil then baked,” says Holly Wales, activation manager at CSM.

For Puratos, the future of healthier doughnuts lies in steaming. But as research and development application specialist Xavier Taverne notes, the company is not looking to replace the fried doughnut.

“We wanted to produce an alternative to the traditional doughnut which would offer health-conscious consumers a lower-fat option,” Taverne explains.

To achieve this, Puratos developed a doughnut recipe based on baking powder, specifically for steaming. This means they have a cake-like texture similar to steamed buns and a more delicate flavour profile.

One downside of steaming, compared with baking or frying, is the lack of a crust.

Part of the characteristic taste of doughnuts is related to the absorption of the oil onto the surface, giving a fried taste and a crispy texture.

“Part of the characteristic taste of doughnuts is related to the absorption of the oil onto the surface, giving a fried taste and a crispy texture. Additionally, the crust has ‘toasted’ notes, due to the formation of compounds as a result of caramelisation and Maillard reactions,” says Andrew Hughes, bakery technology section manager at Campden BRI.

The lack of these compounds, he adds, would result in a healthier doughnut but also change both the taste and texture.

London-based cookery school School of Wok has found success with its steamed bao doughnuts, both ring and filled ones.

“They are essentially just simple yeast doughs that can be baked or steamed or fried into a doughnut shape,” says founder Jeremy Pang. “If you are making a doughnut out of steamed bread dough, we find it’s best to steam it first for 6-8 minutes before pan frying to finish them off.”

A key part of the doughnut experience is the topping or filling. Unlike fried doughnuts, steamed ones require filling before cooking, says Pang. But make sure the filling is thick enough.

Steamed and baked doughnuts are unlikely to rise to the popularity levels of fried ones but, judging by progress already made, they could offer health-conscious consumers a lighter alternative.

Can doughnuts be healthier?

While some explore alternative cooking methods for doughnuts, others have reformed recipes to reduce sugar, fat and calories.

Back in February 2018, Tesco unveiled changes to three of its own-label doughnut lines as it looked to reduce sugar content. The recipes for the jam-filled, custard-filled and sugared large ring doughnuts saw

milk replace egg as part of the sugar-cutting process. While it meant they were no longer dairy-free (something the retailer flagged up on pack), Tesco said the addition of milk allowed for a “soft and fluffy texture” shoppers would expect from a doughnut.

Elsewhere, while not necessarily health-focused, a number of retailers and brands are focusing on creating vegan-friendly treats. Greggs, for example, has recently rolled out a vegan glazed ring doughnut.

This trend, which is growing in a myriad of food and drink categories, has also seen Dum Dum Donutterie add a vegan range to its portfolio (pictured).