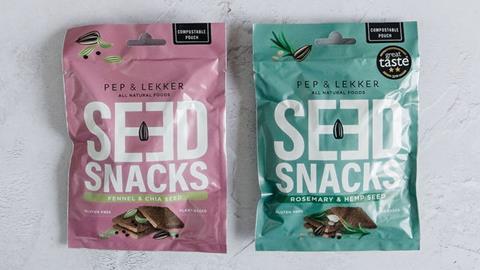 Vegan snacking brand Pep & Lekker has secured listings for two of its products in Sainsbury’s.

Fennel & Chia and Rosemary & Hemp variants of Seed Snacks will be trialled in 70 stores as of this week as part of the retailer’s Future Brands initiative, which champions small suppliers.

The baked snacks, which have an rsp of £2 per 30g pack, are made from a combination of apple puree as well as seeds including chia, sunflower and linseed, alongside other ingredients such as Himalayan pink salt, peppercorns and buckwheat flakes.

The Seed Snacks recipes were revamped last year to increase protein and reduce sugar, as well as remove sesame seeds, making the five-strong portfolio free from the 14 major allergens. In addition, the brand moved to fully compostable pouches.

Other flavours in the range are: Apple & Cinnamon, Cacao & Coconut and Cumin & Linseed.

“The willingness of the fantastic Future Brands team to give Seed Snacks a break as part of their promotion of healthy eating is beyond even our wildest dreams,” said co-founder Susan Gafsen.

If the trial is successful, the products could be rolled out across the full Sainsbury’s estate.