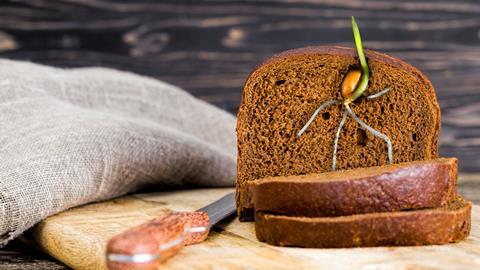 Once considered a mistake, sprouted grains are now a major health trend. But using them is not without its challenges.

Sprouted grains – those that have germinated or sprouted before they are milled – are one of the hottest things on the modern health food scene, but are far from new.

Modern farming methods mean the vast majority of grains used by Britain’s bakers are harvested and milled into flour before they get the chance to sprout. In days gone by, however, rain or damp storage conditions would sometimes cause grain to sprout after it was harvested.

When a grain sprouts, changes take place – mainly increased enzyme activity – that impact how the grain behaves when milled and used as a flour. But these changes can also help make the grains attractive to the healthy-eating crowd.

“There is a lot of scientific evidence that the sprouting process creates changes in the grains that make them easier to digest, as well as making some of the minerals, such as iron, more bioavailable,” says Gary Tucker, head of baking and cereal processing at Campden BRI.

He adds that historical literature and anecdotal evidence suggest sprouting can help maximise the nutritional qualities of grains such as wheat.

“There are many papers, books and articles on the benefits of sprouted grains,” adds Tom Russell, managing director of Everfresh Natural Foods, which produces a range of sprouted grain breads. “Compounds and chemicals that cause issues with digestion, such as phytins and lectins, are known to break down when sprouting or fermentation is allowed to happen and there are documented levels of the increases in key vitamins and other nutrients that are made available in the sprouting process.” 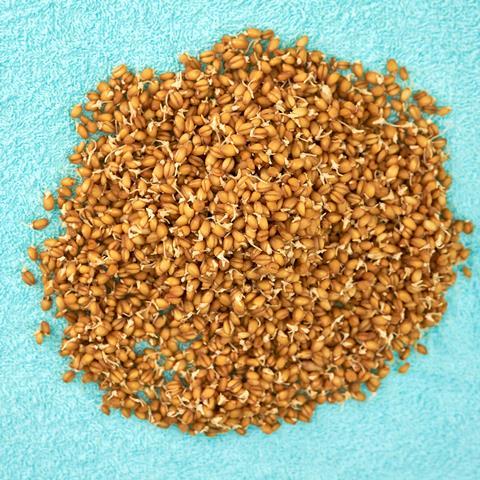 Tests carried out for supplier Linwoods showed a 20% reduction in the amount of phytate in sprouted wheat compared with the control of standard wheat.

“This increases the bioavailability of the nutrients and vitamins to the body,” says Robert Gladstone, managing director of Silvery Tweed Cereals, which has worked with Linwoods on the sprouted grains project. He adds that an increase in water-extractable soluble fibre was also recorded in sprouted wheat.

While the changes caused by sprouting are good news from a health perspective, they have big implications for bakers. Enzyme activity increases as the grain germinates and starts to break down the large starch, protein and lipid molecules into smaller molecules that are more easily absorbed by the growing plant as its food source. The problem for bakers, is that these starches and proteins are used to create structure in a baked product. A product made with only sprouted flour would not have the strength or structure to rise during proofing and baking.

“Bread, for example, relies on gluten development from the wheat proteins, which cannot develop as effectively if enzymatic protein breakdown is taking place,” explains Tucker at Campden BRI. He adds that, to overcome the enzyme issues, most sprouted grains and sprouted grain ingredients are heat-treated to deactivate the enzymes. But, he adds, heat-treating wheat produces malted wheat with its characteristic malted flavours that may not be wanted in certain products.

'A proportion of the flour can be replaced with a sprouted grain ingredient, but enough flour must be retained to achieve the desired baked structure'

Due to the issues with enzyme activity, sprouted grain ingredients are usually mixed with regular flour in bread recipes.

“A proportion of the flour can be replaced with a sprouted grain ingredient, but enough flour must be retained to achieve the desired baked structure,” explains Tucker. “This dilutes the digestibility benefits of sprouting, but is hard to avoid.”

One way to get around these problems in baked goods is by using sprouted grains as inclusions, and many ingredients suppliers have developed such products.

“Provided the grains have been softened and stabilised, then the addition of sprouted grains is a relatively straightforward process,” says Richard Hazeldine, national sales manager at Zeelandia, who adds that the business has seen “real growth” in demand for sprouted grains this year, and expects this to continue to accelerate. 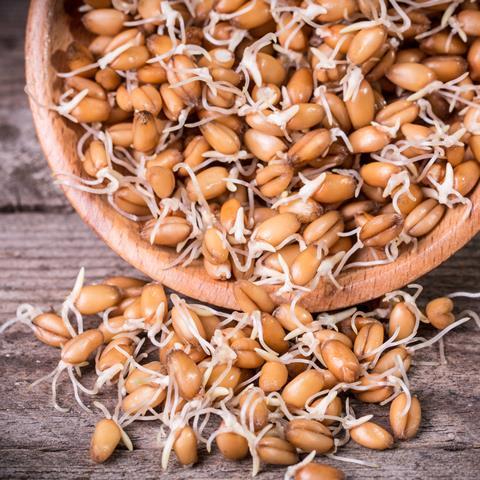 Businesses have also combined demand for sprouted grains with the continued interest in ancient grains. “Essentially, we brought two major trends together,” says Edme managing director Mark Hodson. “One is ancient grains. The other is sprouted foods. Both are part of the back-to-nature, plant-based, authentic food movement. They help fulfil consumers’ search for products that are adventurous and interesting – as well as being nutritious and natural.”

The result was Edme’s WholeSoft Sprouted range of grains that are soaked, sprouted and, rather than being kilned and dried, stabilised through cooking. The initial launch comprised rye, wheat, spelt and naked barley, and this has now been extended with buckwheat, quinoa, einkorn, emmer oats and spelt.

“The ‘sprouted’ label can seriously boost the premiumisation of your products,” adds Hodson. “Now the range gives all the market opportunities associated with the ancient grain tag.”

Puratos, meanwhile, supplies two ranges of sprouted grains. It says its Softgrain products – sprouts, wholegrains and seeds infused with sourdough – enable moisture to be released slowly to prolong freshness and shelf life, while the Puravita selection offers bakery mixes that contain grains which have been sprouted, fermented and then dried.

“In recent research we carried out a blind taste test on sprouted grain bread and a control loaf, with two out of three consumers preferring the former,” says Puratos UK R&D director James Slater.

He adds that the flavour imparted by the grains can help reduce the need for the addition of salt and sugar. Which is further evidence that while the origins of sprouted grains lay in the past they can tap many of the trends shaping bakery’s future.

Can sprouted grains grow beyond a niche?

While interest in sprouted grains continues to grow it remains a small and arguably niche market. Do those in the industry feel it can become more mainstream?

“It’s early days to know the potential market size for sprouted grains. The interest in healthier products that are low in salt, sugar and saturated fat shows no sign of decreasing. Also, the digestibility of cereal products is big news. Sprouting offers benefits to digestibility that could encourage consumers to eat more bakery products. The challenge to the bread sector is how to convince consumers that bread is a healthy product, particularly when made using wholegrains. Sprouted wholegrains may help the sector achieve this.”

“There are many more brands offering sprouted grains as parts of meals/salads/breads etc and, as consumers become more aware of the benefits, their popularity will definitely grow. I doubt it will ever become mainstream in the way of your typical weekly shopping basket, but for those who are seeking a more natural and health-aware diet that is not forced upon them by, for example, medical reasons, then sprouted grains will become a must-have.”

“Linwoods has recently opened a facility to sprout or germinate grains, along with the capacity to dry them. This means the sprouted grains can be flaked or kibbled by Silvery Tweed Cereals, or milled into flour. This opens up a range of ways to include sprouted ingredients into baked products and a wide variety of applications in both the bakery sector and cereal sectors such as an ingredient in muesli.”

“Ancient and sprouted grains offer a wide range of benefits to consumers. Sprouted grains are a popular choice with consumers who are keen to choose ‘power ingredients’ that have health and taste benefits and that they consider to have a close connection to nature. Some grains are high in fibre or protein or contain other important nutrients.

“Ancient and sprouted grains can also boost the visual appeal of baked goods. A loaf made using ancient grain flours takes on a slightly different colour to a traditional loaf, which can be a simple way to boost consumer interest and differentiate ancient grain options. Sprouted grain flours can be used as an alternative to traditional flours and not just for making bread; they can also be used in cakes, biscuits and chocolate.” 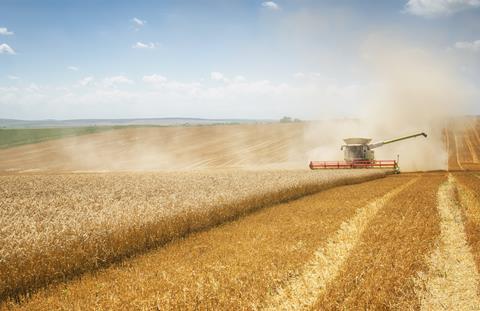 Brexit has put the UK’s food supply chain in the spotlight, although bakers need little convincing of the benefits of buying grains locally.

Around 70% of wheat used by bakers is grown in the UK and, as consumer interest continues to grow, an increasing proportion of ancient grains such as spelt and emmer is being supplied by British farms.

“Consumers are increasingly looking for British products,” he adds. “In turn, companies are targeting these shoppers by sourcing British ingredients and promoting the Union Jack on their packaging.”

Craggs & Co describes itself as the UK’s largest producer of British-grown ancient grain wheat and products. It has more than 2,000 acres of land in Sedgefield, County Durham, and farmers across the country contract-growing spelt.

Farmers are typically risk-adverse and like to stick to crops they know, which can make finding new growers difficult – particularly in the case of ancient grains such as spelt, einkorn or emmer.

“However, this year has been different,” says Craggs. “There has been a shift in attitude towards alternative crops, and farmers are beginning to see the benefits of ancient grains.”

Reasons for this, he suggests, include a fall in traditional milling wheat prices and a rise in spelt prices to meet increasing consumer demand.

“With the change in our climate and in a post-Brexit referendum era, a lot of these grains are now being grown in the UK, so supply chain risk is very low,” explains Silvery Tweed managing director Robert Gladstone.

He believes quality, heritage and food miles add value to end-products. “The consumer base enjoys spending a little extra on quality added-value products as treat or occasion bread while reducing consumption of standard white everyday bread.”