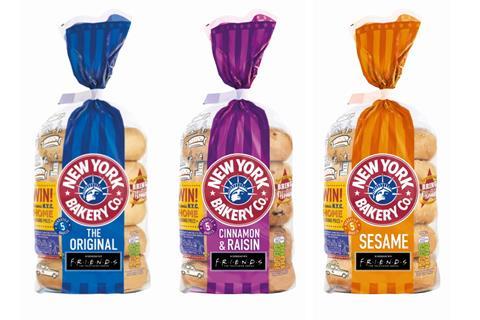 The promotion, which kicks off on 3 August, will run across all packs of New York Bakery Co bagels for three months and offers consumers the chance to win one of three grand prizes, as well as one of thousands of smaller prizes every week.

Each element within the grand prize is inspired by the main characters – Rachel, Monica, Phoebe, Joey, Chandler and Ross. It includes two lazy boy-style chairs, a foosball table, a coffee machine, an apothecary table, a telescope and a selection of the latest kitchen gadgets and utensils.

Consumers will also be given the chance to win one of a thousand other prizes every week, including Hugsey the penguin toys, Friends aprons, Friends games, as well as NYBC bagel tins and tote bags

The activity is part of a wider partnership deal that sees NYBC return to TV with a spot advertising campaign on Comedy Central, Comedy Central Extra and Channel 5 throughout the summer.

It will be supported by PR and influencer marketing, as well as a social media campaign.

“With our unique on-pack promotion in partnership with Friends, we want to offer consumers the chance to win something extra special, and fun, for their home — an iconic grand prize we hope they will love as much as we do,” said Christina Honigfort, head of marketing at New York Bakery Co.

“You don’t get more New York than bagels and Friends and this is our way of bringing a taste of the city to the UK. With all the activity we have planned in the coming months, we’ll be sure to take our messages around taste and authenticity far and wide to millions of shoppers each week.”

NYBC partnered with Friends last year for a TV tie-up as well as an exclusive set of recipes inspired by the main characters.