‘She was crying with happiness when we offered her the job’ 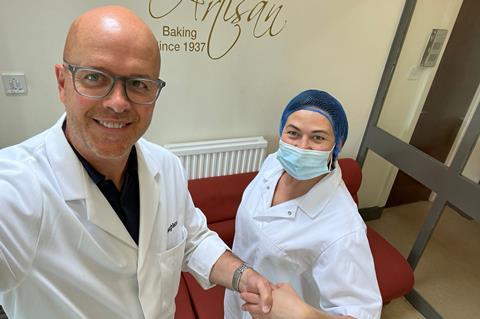 Coughlans Bakery, based in south London, recently became one of many employers across the UK to help Ukrainian refugees start a new life in the UK.

The move has proved to be a feelgood process all round. After all, to recruit a person whose eyes well up with tears of happiness at being offered a job is surely a scenario that most employers would aspire to.

Sean Coughlan, director of the 27-shop family business, says that Coughlans’ new Ukrainian member of staff is settling in well at the company’s central bakery, despite her currently limited English.

“It is great to see the lady happy working here at our bakery, after all the trauma that she has been through following the Russian invasion,” he says. “She was crying with happiness when we offered her the job.”

Coughlans made the connection with Tetiana, 47, through a local Russian parent who had been so outraged by the invasion of Ukraine in February that she started working with local families to help Ukrainian refugees in the area.

Employers might worry that taking on a Ukrainian refugee would involve a daunting amount of red tape, but Coughlan reports that the process was straightforward.

“There is no red tape for Ukrainian refugees, they need entry clearance via email to come here, and then they do biometric enrolment and get a biometric residence permit (BRP), an ID card with visa information on it,” he explains. “We could sort out National Insurance straightaway.”

The new recruit was the manager of a dental practice in Ukraine. She has been through a training course at the Coughlans’ central bakery in Thornton Heath, and is now enjoying working as a baker alongside 60 other members of staff. Her working hours also allow her time to take a language course if she chooses to.

Coughlans did have a false start with its first Ukrainian refugee, who turned out to be struggling with health issues which meant he had to leave the company after only two days – news conveyed to Coughlan with the help of a translator. He took that turn of events in his stride.

“Whether someone ends up being here for just a month or for longer, we want to help, you have to deal with these things in the present moment,” the director said. “We want to make things better locally by offering jobs to refugees. We will be taking on further Ukrainians if they come through for vacancies.”

“Whether someone ends up being here for just a month or for longer, we want to help”

The third-generation Coughlans family company has always been a multicultural community. Its 170 staff hail from a variety of backgrounds including African, English, Irish, Polish, Thai, Chinese and Indian. It previously took on Sri Lankan refugees. Many staff stay for decades, and staff turnover is extremely low. The Coughlans’ central bakery manager came over from Ghana as an 18-year-old and has now been with the company 31 years.

The new Ukrainian representation on the workforce is just the latest in a long line of happy new recruits.