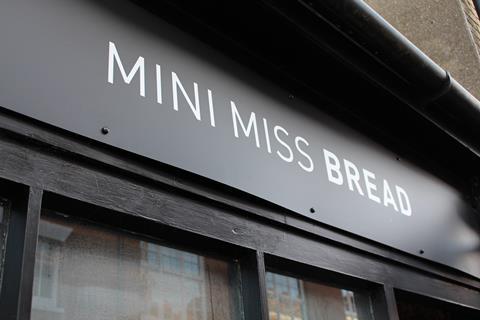 Essex-based Mini Miss Bread has launched a crowdfunding campaign which, if successful, will see the artisan bakery secure an acre of farmland in which to grow its own ancient grain.

The campaign, called MMB: Soil to Sourdough, comes off the back of a crowdfunding push by Duchess Farms which is raising money to buy a dehuller and mill. A donation of £3,000 to Duchess Farms would secure one of its fields for a year on which it would grow an ancient grain of the donator’s choice, before milling it and delivering a tonne of resulting flour in autumn 2021.

“When I saw they were doing a crowdfund to grow their resource I really wanted to do what I could to spread the word and help them reach their financial goal,” founder Megan Charnock, who started Mini Miss Bread in 2017 with her husband Jeff, told British Baker.

“Then when I saw that one of their rewards was to get an acre of field to grow our own grain, I couldn’t stop thinking about the possibility of an MMB field and within the space of 24 hours I’d made the decision to launch our own crowdfunding.”

The bakery has raised more than half of the required £3,000 in two days since launch.

Those who donate £10 or more will receive a 1kg bag of Duchess Farms Heritage Grain Flour, the option to join Mini Miss Bread on site visits to the farm to see how the grain is growing and, in September 2021 once the bakery has taken receipt of the MMB: Soil to Sourdough flour, donors will get two loaves of sourdough made from it and well as a 1kg bag of the flour.

Charnock said she would be “flabbergasted” if MMB was able to meet its target.

“I know the Saffron Walden and Mini Miss Bread community are very supportive and I hope they feel as excited and inspired as I do about this project,” she added.

“It’d also give me hope that if we can achieve something like this here then there is scope for it to happen many times over. Can you imagine lots of bakeries in the UK each having the chance to grow their very own grain? I believe it’s possible if enough people get involved and have the conversations needed.”