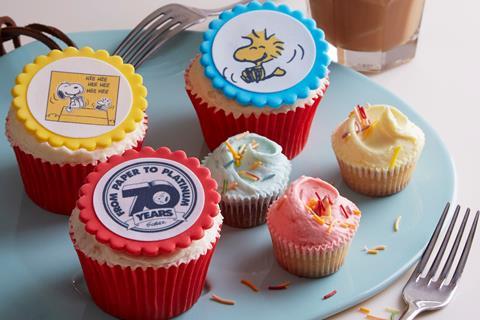 London-based Hummingbird Bakery has teamed up with American comic strip Peanuts to unveil a limited-edition range of cupcakes.

The Hummingbird Bakery x Peanuts collection will include four character-topped Peanuts cupcake gift boxes and three layer cakes to mark the comic strip’s 70th anniversary. The range will be available from 1 – 30 September.

Created by Charles M Schulz in 1950, the Peanuts comic strip features Snoopy, the pet beagle of Charlie Brown. The comic strip also showcases characters Sally, Lucy, Linus, Patty, Schroeder and the little yellow bird, Woodstock. It takes a philosophical look at life from the perspective of childhood, said the firm.

The Hummingbird Bakery x Peanuts collection will be available from the bakery’s six London branches. Consumers can order the collection online from 1 September via Hummingbird’s website for delivery to selected London postcodes or collect it for free in-store from 2 September.