There is a growing donut market development, and the donuts have become a ‘canvas for innovation’. With brightly coloured icings, loaded toppings, and new formats, the donut is experiencing a renaissance, as Dawn Foods explains. 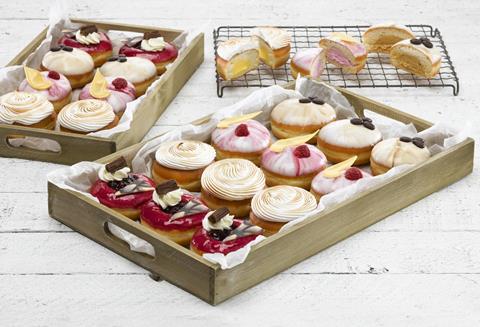 There are fast-moving changes in the donut category as the humble donut becomes a ‘canvas for innovation’. With brightly coloured icings, loaded toppings and new formats, the donut has become quite Instagram-able and the go-to snack for treating, gifting and sharing.

So why are donuts having such a renaissance? Jacqui Passmore, marketing manager at Dawn Foods UK and Ireland, looks at what’s behind the donut’s newfound status and what’s trending in the category.

A Friday treat for work colleagues, a birthday gift or simply a ‘me-time’ treat, donuts are big news, says Passmore. “However, these are not the ‘six in a bag for a £1’ donuts (although of course they are still much loved), but premium, indulgent American-style raised donuts, filled and decorated with all kinds of treats.”

The growing trend for donuts was started in the UK some years ago and is now being further driven across Europe by the opening of multinational donut franchises, as well as independent specialist donut shops, artisan bakeries and donut delivery services, reveals Passmore. “The growth has also been helped by the fact that, in Europe, donuts are softer, with a delicate structure and are viewed as a ‘cake’ item consumed during a coffee break or at teatime in the afternoon. This has gone hand in hand with the growth of coffee and the resulting array of eating occasions and, of course, the boom in social media.”

So, what’s new in donuts?

“While the classics – jam, custard, caramel and chocolate – remain the top flavours for everyday donuts, with favourite toppings including sprinkles, a simple glaze or chocolate, we are seeing some fantastic creations that are also breaking traditional boundaries, of flavours, textures and formats,” says Passmore.

“Donuts provide a superb blank canvas for bakers to go to town creatively, with hybrid dessert-cake combinations right on-trend,” she says. “We’ve recently seen some tempting flavour combinations in the market, including a lemon meringue donut with lemon curd filling, Jaffa chocolate orange donut and an apple crumble donut, among many others.” 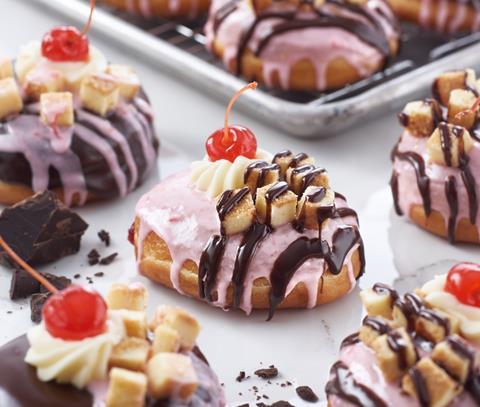 As far as toppings are concerned, flavoured and coloured icings add ‘pick me up appeal’ with the addition of sugar sprinkles, freeze-dried fruits and nuts for added texture, she notes. “Some donut suppliers are tapping into the trend of over-the-top indulgence, with the addition of fresh fruit and cream, a sheet of honeycomb, or even the addition of brownie or confectionery pieces to their products. This trend is also reflected in current vegan donut offerings. It’s all about personalisation and individual treating.

“While this innovation is being driven by independent artisan donut companies, many supermarkets are also innovating with increasingly exciting toppings too. It’s thrilling to see what will come next.”

However, the donut revolution isn’t just about amazing toppings and decorations for Instagram, there are some progressive moves to re-invigorate the donut format too, ensuring that the product tastes as good as it looks. And of course, hybrids such as cronuts continue to develop, keeping the category constantly on its innovation toes.

While toppings and fillings have taken centre stage, Dawn Foods is seeing innovation in donut dough, too. “Sourdough is the first donut texture to be launched into the bakery sector for many years, as well as the explosion in veganism across all food categories,” says Passmore.

Sourdough is gaining ground as a popular choice worldwide, with an increasing range of product offerings. As global consumers get more accustomed to the flavour of sourdough, it is becoming an emerging trend in sweet baked goods as well, she adds.

“Dawn Foods’ own trend research sees sourdough firmly grounded in consumers’ sweet spot; a trend boosted by repeated lockdowns. This fascination is reflected in the 384% rise in ‘sourdough’ Google searches tracked at the beginning of the pandemic.

“The food industry took notice of this increased consumer interest, with sourdough new product launches recording an average annual growth of 15% over the past five years1. From sourdough snacks to dark chocolate with sourdough, innovation in this space escalated in 2021 and we expect this growth to continue.”

Dawn Foods believes a sourdough donut sounds like a pretty good combination and finds it surprising that no one has thought of it before. “It combines everything we love about sourdough bread and yeast-raised donuts and appeals to our desire for slightly less sweet bakery products,” explains Passmore. “A good sourdough donut will have a buttery but slightly acidic, sourdough flavour that’s much less sweet than a standard American-style donut. A dark sourdough bread-like crust gives added texture, but the inside of a sourdough donut has a soft, light, and airy eating quality which UK consumers love.”

Interest in veganism has also witnessed rapid growth in recent years, with on-pack vegan claims up 23% in the cake and bakery category2.

As well as committed vegans, one in five European consumers now identify as flexitarian, providing a massive opportunity for bakers, adds Passmore. “Happily, there is a broad range of good-quality vegan ingredients and finished vegan bakery items to enable bakers to make the most of this opportunity. Leading donut brands have picked up on the opportunity of appealing to a new younger generation with products that aren’t just Instagram-friendly but appeal to Generation Z’s awareness of ‘conscious consumerism’ too. The ‘coolness’ and premiumisation of donuts has seen them evolve into far more than supermarket bakery staple. We now see donut celebration cakes, ‘towers’ or walls for weddings, premium donuts plated as a dessert option and many new variations of the classic donut such as beignets, churros, and fritters. Some high-end hotels are even offering a ‘donut trolley’ as part of their afternoon tea offering.”

With more high-quality ingredients going into artisanal donuts, it may seem hard for bakers to protect their margins. “Often the flavours and textures that today’s donut lovers want to enjoy mean high-end ingredients, but consumers are willing to pay more for fashionable donut treats,” says Passmore. “As a result, operators can increase the quality of the ingredients because the premiumised price point is going to justify that. Bakers can easily upgrade a basic donut made with a quality mix, with innovative ingredients and branded additions, such as biscuits or on trend flavours which can also be highlighted on the menu to secure premium pricing.”