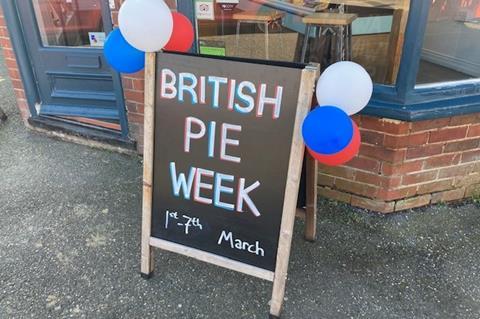 The nation’s pie makers have been celebrating British Pie Week in style with new product launches, charity drives and competitions.

Here British Baker looks at some of the activities taking place during 1-7 March, the special week in the calendar dedicated to pie promotion. 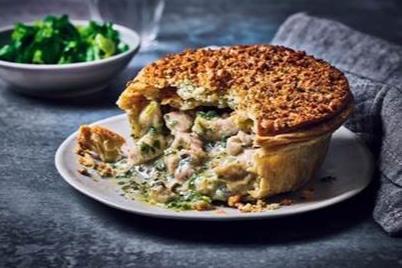 M&S has marked British Pie Week with the launch of the Gastropub Chicken Pie-Ev – putting the family favourite chicken kiev into pie form.

The pie is made with British chicken in a creamy garlic butter sauce, topped with panko breadcrumbs, encased in all-butter shortcrust pastry and topped with a puff pastry lid.

The ‘epic hybrid’ hits the shelves some 42 years after M&S launched the first chicken kiev for British consumers.

“Customers love our pies and they love our iconic kiev so we had to create this match-made in heaven… just in time for British Pie Week,” said Bethany Jacobs, M&S pies product developer.

“We’re famous for our innovative hybrids so when we had the idea for a Pie-Ev we knew it was a winner.”

Gastropub Chicken Pie-Ev is priced at £3.75 and serves one. 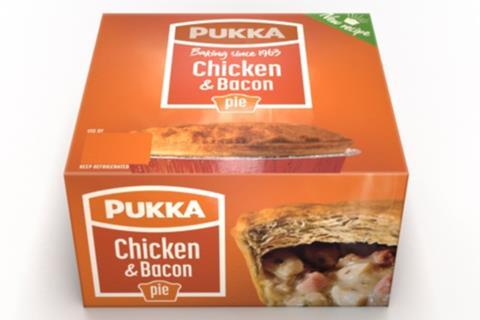 Hot on the heels of British Pie Week will be the launch of a classic Chicken & Bacon Pie from Pukka. The new addition to the company’s chilled individual pie portfolio pairs pieces of chicken breast with smoked diced bacon in a creamy sauce, encased in 144 layers of puff pastry.

The launch will be highlighted with a ‘new recipe’ flash on the front of the recyclable orange packaging.

“Chicken & bacon is a popular flavour combination in the UK and is one of the top 10 pie recipes. When you couple this with the fact that ‘Creamy Chicken & Bacon’ came out top in our independent consumer research, our new pie is sure to become a firm favourite, particularly among younger shoppers,” said Rachel Cranston, head of marketing and innovation at Pukka.

Pukka’s Chicken & Bacon Pie will go on sale in Morrisons from 15 March (rsp £1.89, 213g) and rollout into Asda and other supermarkets nationwide throughout the rest of the year.

Higgidy has pledged to donate over 100,000 pies to FareShare via its ‘pie for a pie’ on-pack initiative.

The company will donate a meal to the charity for every Higgidy pie purchased during British Pie Week, with special stickered packs on sale in supermarkets.

As part of its #PieceOfThePie social media promotion of the initiative, Higgidy is offering 500 pie lovers the chance to win a freebie and gift one to a friend, with the company donating £1 to FareShare for every pie claimed.

“Higgidy’s donation of 100,000 pies throughout Pie Week will help to feed the most vulnerable in our society, while also help to bring people together. That’s what food does, it brings people together,” said Lindsay Boswell, CEO at FareShare.

Higgidy has also launched two sharing sized pies to celebrate British Pie Week: Steak & Sussex Ale and Chilli-Roasted Sweet Potato & Feta. Both are available from Sainsbury’s with an RRP of £6. 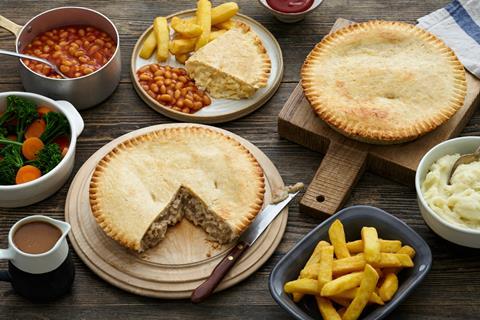 The pies have it for Holland’s

Holland’s Pies is celebrating British Pie Week in democratic style by asking consumers to vote for their favourite flavour from its Family Pie range.

“British Pie Week is one of the biggest weeks in the pie calendar, so we’re excited to be rallying our amazing fans to choose their favourite flavour of Family Pie and to help us crown a champion! We know the decision will be tough and may cause divisions, but there can only be one winner,” said Leanne Holcroft, brand manager for Holland’s Pies.

Particpants can cast their vote via the Holland’s website and be entered into a prize draw to win a year’s supply of family pies. Five winners will be selected at random, with entries closing before midnight on Sunday 7 March.

The Lancashire baker is also donating 170 pies to charities and food banks every day during British Pie Week. 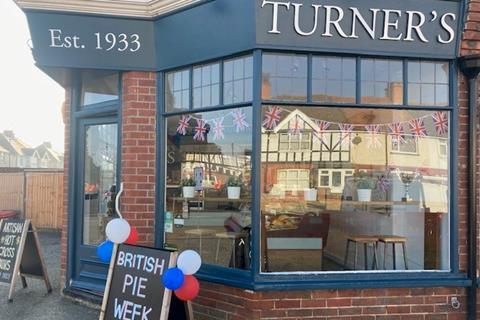 Turner’s turns up the heat

West Sussex baker Turner’s Pies has ramped up production to cater for extra demand during British Pie Week, as well as dressing its stores with bunting and balloons to befit the occasion.

“We want to celebrate with our loyal customers and give them an even brighter welcome when they come into our stores in Chichester, Bognor Regis, Worthing and Rustington,” said Phil Turner, managing director.

“Throughout the week we’ll be doing giveaways and continue to collaborate with our chosen charities to try to help raises awareness for them on the back of all that we are doing for British Pie Week.”

In 2020, Turner’s was crowned supreme champion at the British Pie Awards for its steak and ale recipe, and the company has been using its social media feeds during British Pie Week to showcase this and other accolades won over the years.