Warburtons and Toast Ale use wonky crumpets in beer 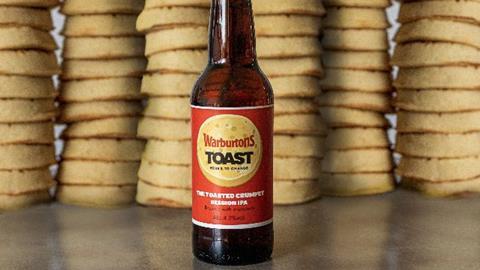 Warburtons has teamed up with Toast Ale to create a beer made from surplus crumpets.

The Session IPA, which has a 4.2% alcohol content, represents Warburtons’ first non-baked product in its 140-year history and is brewed with so-called ‘wonky’ crumpets that weren’t suitable for sale.

It is made by replacing the malted barley usually used in beer-making with crumpets, extracting starches and sugars and breaking them down into fermentable sugars.

Currently, The Toasted Crumpet Session IPA is available on a limited-edition basis, but Warburtons said it could be rolled out on a larger scale if consumer demand was high enough. It costs £28 for 12 x 300ml bottles, available from the Toast Ale website.

“We’re thrilled to announce an innovative way of utilising our ‘wonky’ products while celebrating the nation’s love of crumpets in a whole new way,” said Darren Littler, head of product innovation at Warburtons. “We are proud that Crumpet Beer is our first non-baked product we’ve ever launched.”

James King, marketing and brand manager, Toast Ale added: “Our mission remains to brew beer that is planet-saving and palate-pleasing, and we couldn’t be more excited to venture into the world of crumpets. As a British staple, they bring something different than our bread-brewed beer, with a unique taste. We will continue to toast change and hope everyone loves this new Crumpet Beer as much as we’ve loved brewing and tasting it.”

The beer is part of Warburtons’ work looking at innovative ways to give its surplus bakery products and food waste a second life.

Hackney-based Toast Ale – which normally brews beer from surplus bread – hit the scene in 2016. Since then, it has gained supermarket listings for its beers and, last year, teamed up with London’s National Bakery School and Orbit Beers to create a beer marking the school’s 125th anniversary.