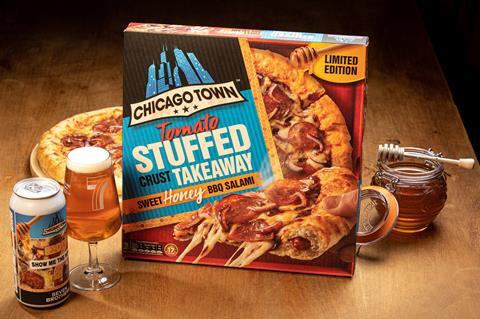 Chicago Town wants a pizza the alcohol market and has teamed up with Manchester-based Seven Brothers Brewing Co to create a pizza-inspired beer.

The limited edition Show Me The Honey beer, which is available for October only, is inspired by the sweet and savoury flavours of the brand’s latest pizza – the Stuffed Crust Takeaway Sweet Honey BBQ Salami. Both were launched to celebrate International Beer & Pizza Day on 9 October.

Available now for an rsp of £4.49, the pizza features a tomato sauce filled crust topped with sweet honey BBQ sauce, a blend of mozzarella & red cheddar, as well as salami and red onions.

A recent poll conducted by Chicago Town found that 76% of people who drink alcohol with pizza would choose beer.

“As we saw in our poll, beer is the most popular alcoholic drink to accompany a slice of pizza. So, what better way to celebrate International Beer & Pizza Day than to create a beer inspired by the bold flavours of our new Stuffed Crust Takeaway Sweet Honey BBQ Salami,” said Rachel Bradshaw, spokesperson for Chicago Town.

The first 100 customers to purchase the new Show Me The Honey beer, via the Seven Brothers website, will receive a voucher for a free Sweet Honey BBQ Salami pizza.

“We were keen to replicate the pizza’s aroma and taste in the flavour profile of Show Me The Honey. To capture the perfect pairing, the team sampled each of the toppings here in the brewery and mapped out the brew based on the flavour notes we needed to hit,” said Jack Dixon, brewer at Seven Brothers.

“Chicago Town pizza dough is made fresh every day in its bakery so was easy to replicate with yeast, the base for any beer. Hops were added to give it a smoky salami bitterness, but not too late in the boil as we didn’t want it to overpower the honeycomb malt syrups. These syrups are added to replicate the sweet, yet tangy, honey BBQ sauce found on the pizza.”