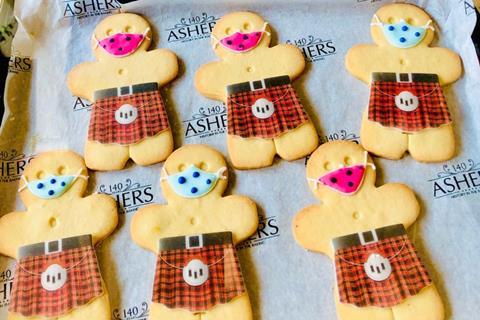 Nairn-based Ashers Bakery has rolled out masked shortbread biscuits that highlight life during the coronavirus pandemic.

Available at an rsp of £1.29 from Ashers stores and retailers including Scotmid and Spar, they are a ‘coronavirus twist’ on Ashers’ MacGinger biscuits, with gingerbread people wearing kilts.

But the biscuits have caused a stir on social media with debate on the bakery’s Facebook post regarding the wearing of facemasks.

One user described the biscuits as a “seriously bad business move”, adding “I hope it boosts your sales for now because it has done your reputation no good”.

It wasn’t all negative though, as many users described the biscuits as “great fun”, “clever”, “a reminder of protection” and “the new norm for a while”. The bakery added that it has increased production as the biscuits have proved so popular.

“We had not expected the debate that it opened on our Facebook after launching the new product,” said co-managing director Ali Asher.

“We certainly do not want to offend anyone who is anti-wearing a facemask - they have every right to their opinion on the matter, as do people who are pro-wearing facemasks. We just ask that people are kind and respectful to each other.”

He added that feedback had been largely positive, and that the products were intended as a fun representation of current conditions.

Most Ashers shops are now open again, but opening hours are being reviewed to meet customer needs and keep staff safe.

Established in 1877, Ashers Bakery has 12 shops across the Highlands and Morayshire.