History in the making: Flour & Spoon 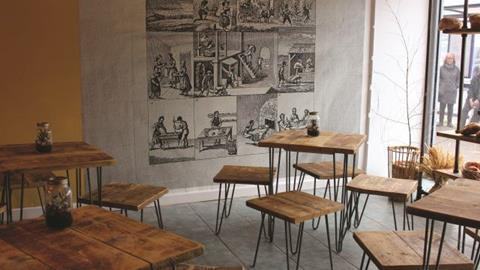 There’s a real sense of homeliness when you step into Flour and Spoon’s bakery in Leigh-on-Sea, Essex.

It stems from the smiling staff, their rapport with the customers despite only opening in December and, of course, the wafting smell of fresh bread and array of tempting cakes on offer.

It’s a pretty relaxing place to stop for a spot of lunch or a slice of cake and a cup of Rainforest Alliance-approved coffee. That’s precisely what owner and head baker Roman Jedlovec was aiming for, particularly given the competition in the area; family business Grout’s the Bakers is close by and, on the nearby high street, 14 cafés vie for attention.

It’s also why retail plays a more important part in Flour and Spoon than wholesale, although it does supply some loaves, bagels and burger buns to local hotels and restaurants. “I want people to experience the atmosphere and environment here,” says Jedlovec. “We have lots of enquiries from local cafés for bread, but… I’d rather encourage people to come visit us instead.”

Based on the reception from locals, his strategy is working. “In the 1920s this used to be a bakery,” says Jedlovec, explaining that it was a charity shop before he opened. “[So] people were excited to find out we were opening an artisan bakery.”

It already has regulars, with some using its click-and-collect system to order the likes of sourdough croissants, cruffins, and breads such as Polish walnut & raisin sourdough, German dark rye and the unusual organic bamboo charcoal sourdough.

All are baked in a Lincat four-tray steam oven nestled in a corner of the bakery’s kitchen. Jedlovec reveals a second site, which he hopes to open in a couple of years, would have space for a larger oven and, ideally, a window so visitors can see the baking in action.

If that weren’t tempting enough, Flour and Spoon aims to tick a number of boxes including “locally-sourced ingredients”, “handmade products”, “real bread” and “plastic-free”, with visual cues across the bakery and café supporting these claims. The milk, in glass bottles, comes from Bradfields Farm in South Essex. Jedlovec takes sourcing so seriously he even visited the farm. “They are happy cows,” he says.

A mural on the wall, depicting bread production in the 1800s,  reflects Jedlovec’s love for artisan bread. He had to get special permission to use the image from Vanessa Kimbell, who had previously published it in her book, The Sourdough School.

What: Essex meets Czech Republic. Flour and Spoon is Jedlovec’s first bakery, in which he produces a range of loaves  open sandwiches, and sweet treats. Sourdough classes are also due to start this month.

When: Jedlovec moved to England in 2006 despite speaking no English. After learning the language, he spent the next few years working in kitchens of various hotels. It was here he rekindled his love for baking, opening Flour and Spoon in December 2018

Why: “I always wanted to have a proper old-fashioned bakery,” says Jedlovec, who first learned to bake during childhood thanks to his grandma. “This location is perfect because [it’s] a little bit out of the town.”

Atmosphere: “We wanted to make it feel homely and cosy,” he says. The tables, chairs and counters are all made from old scaffolding boards for a warm, yet minimalistic atmosphere.

Signature sourdough: “The Essex sourdough is made from my own leaven created three years ago,” explains Jedlovec. “It’s our best-selling loaf.”

Carr’s Flour: Flour and Spoon believes working with local producers is important, which is why it chose to partner with Carr’s Flour, which has a mill in Maldon, Essex.

Simple but effective:  When it came to naming the bakery, Jedlovec says he was “looking for something different”. He chose Flour and Spoon as they’re two items he uses every day.