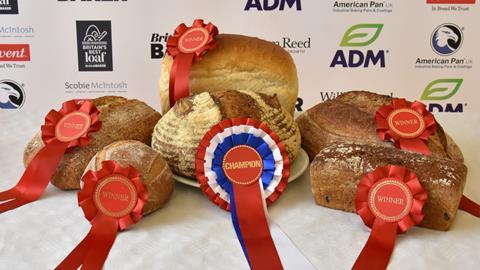 It was chosen as the standout winner from the competition’s six categories: Gluten Free, Innovation, Plain Sourdough, Sourdough with Other Ingredients, White and Wholegrain (see full list of the winners and highly commended loaves below).

The winning loaf stood out to the judges thanks to its innovative use of ingredients. The process is kicked off by creating a tea from hops which is used to make a sourdough starter. Once it’s had a week to mature, the starter is mixed with strong white flour and water before toasted spent beer grains, which have been soaked in ale overnight, are added from the Hop Shed Brewery. The loaf is bulk fermented for four hours then shaped and retarded overnight before baking the next day.

“The Wild Hops & Barley Loaf from Peter Cooks Bread is a deserving winner of Britain’s Best Loaf. It is a beautiful, and tasty, loaf with a great story behind it,” said Amy North, editor, British Baker.

“It faced stiff competition – the judges were very impressed with the overall quality of entries this year, particularly in the innovation category where we were delighted with botanical loaves, cheesy concoctions and some truly outstanding bread.”

The event was sponsored by ADM, American Pan UK and Scobie McIntosh/Revent, and took place at Meridian Hall in East Grinstead on 23 September 2020. The judging line-up comprised: 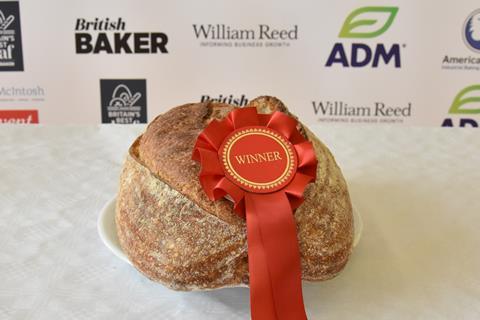 This sourdough is made using organic strong white flour and 10% stoneground wholemeal, with a long fermentation.

A great appearance, open, even structure and well-rounded aroma which matched with the slightly sour taste were some of the compliments given by the judges. 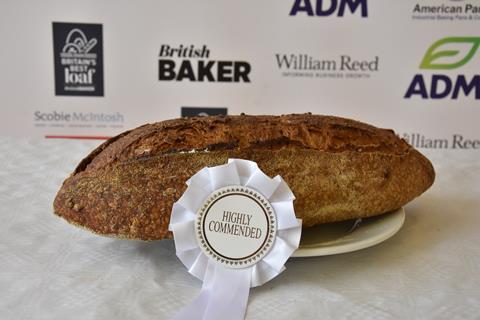 This granary loaf is made using a blend of granary flour and strong wheat flour. 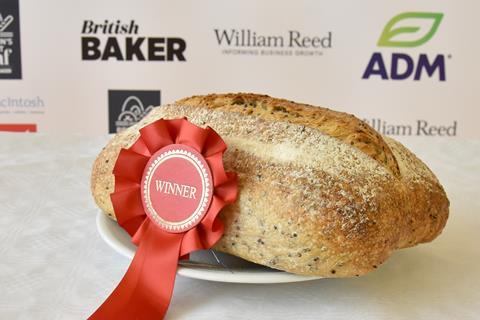 This loaf takes over 20 hours to make and features wheat flour and sprouted quinoa.

The judges described this as a “well-crafted artisan loaf” with a lovely shape, good even bake and a nice crust. What’s more, the texture was even throughout and, importantly, the loaf tasted great. 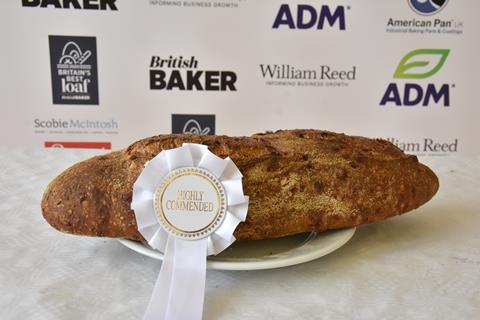 This loaf is renowned among Britain’s Best Loaf judges, having previously secured the title in 2017 as well as Speciality Bread Product of the Year at the 2019 Baking Industry Awards. It’s made with a cold proofing method over a three-day period and features a blend of seeds and grains, mixed with grated beetroot as well as slowly roasted beetroot. 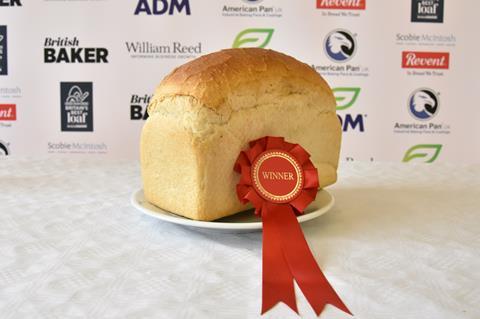 Seasons Bakery uses what is describes as the finest flour, a traditional method and a slightly cooler proofing temperature than usual to add a little more taste to this loaf.

“This is good honest bread,” according to the judges, who also noted that it was perfectly proved, had a consistent texture throughout and was simply “a nice loaf with a great flavour”. 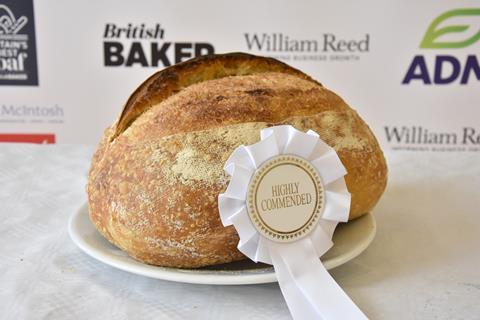 The Ledbury Loaf takes three days to produce and is described as a sponge and dough loaf. Peter Cooks Bread said it has similar characteristics to a sourdough loaf with great keeping qualities and ‘bags of flavour’. 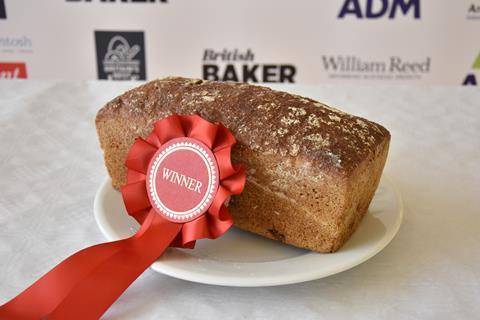 The judges said “you could really taste the grain” in this loaf which was paired beautifully with the almost jammy cranberries inside. It was also praised for its neat appearance, both inside and out. 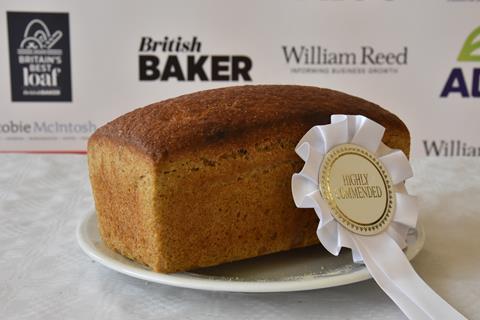 Similar in appearance to the winning wholegrain loaf, minus the cranberries, this one is made using wholemeal flour, levain, salt and water. 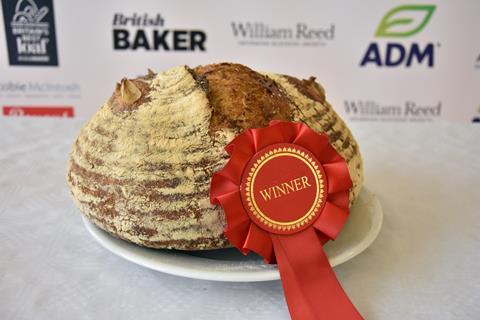 Wanting to reflect local produce, Peter Cooks Bread used hops from the field that surround its bakery by brewing them as a tea. This is then used to make a sourdough starter.

Once it’s had a week to mature, the starter is mixed with strong white flour and water before toasted spent beer grains, which have been soaked in ale overnight, are added from the Hop Shed Brewery. The loaf is bulk fermented for four hours then shaped and retarded overnight before baking the next day.

Described by the judges as a beautiful loaf with a beautiful story behind it, they were impressed with the innovative use of ingredients which resulted in a standout loaf with a great taste. 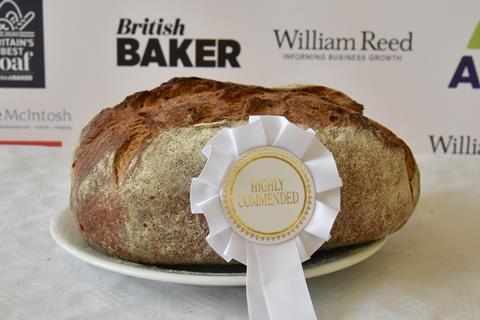 To start its Waste-less Sourdough, Gail’s takes unsold loaves from the day before and mills them into breadcrumbs which are then toasted. Once cooled, a porridge is made from them and it is mixed into the dough which is proofed, shaped and baked to create a moist, tacky loaf with scorched crust. 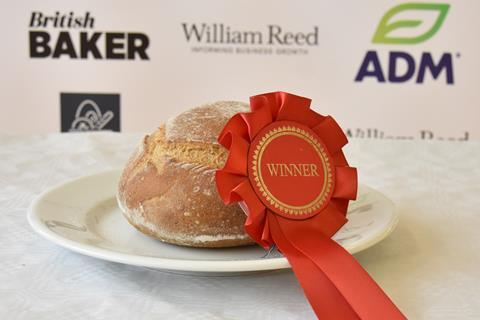 The 350g loaf is made with brown teff, brown rice and chickpea flour as well as wild yeast and is made in Gail’s gluten-free bakery.

It had “everything you’d want from a gluten-free loaf” from an inviting exterior to an impressive texture inside, as well as a nice taste, according to the judges. 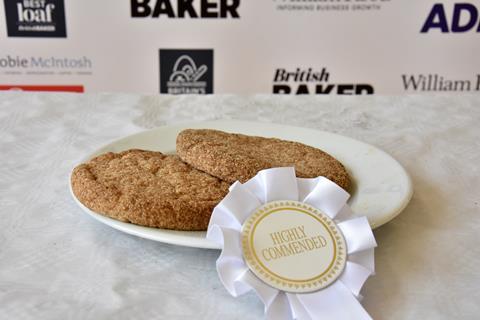 Saltire Coconuts describes its product as unique and allergen-free, as well as naturally gluten free and vegan. An alternative to bread, rolls or on the side of soups or curries, it is made with coconut flour and oil which give it a mild coconut taste.