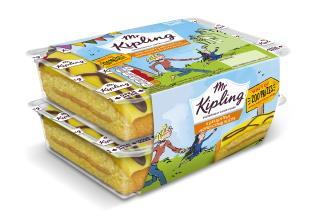 A packaging redesign is also being rolled out across Mr Kipling’s core range with characters such as The BFG and Matilda appearing on packs of French Fancies and Bramley Apple Pies.

It also features an on-pack promotion that gives shoppers the chance to win thousands of prizes, including UK trips and experiences inspired by the Roald Dahl stories as well as books and games.

“Our partnership with the Roald Dahl Story Company in 2019 was incredibly successful, with the limited-edition range inspired by Roald Dahl stories driving £3.6m retail sales value and attracting incremental family shoppers to the brand at a time of year when sales of ambient cake tend to slow,” said Matthew Bird, brand director for sweet treats at Premier Foods.

“This year’s design again provides standout on shelf and we expect the unique flavour twists on our traditional SKUs to be a hit with consumers.”

The campaign will be supported by in-store activity including digital, aisle end and bespoke branded display units to help generate interest among customers.