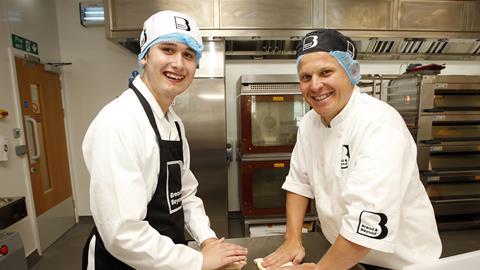 “Our young people work very hard in the bakery”

The team at Bread & Beyond, a commercial bakery that trains young people with severe autism, is optimistic about the future despite the challenges posed by the ongoing pandemic.

Located at Prior’s Court school in Berkshire, the bakery has recently marked two years in business during which time it has racked up a number of achievements. First and foremost, according to education lead Sara Evans, is the progress made by the young people it works with.

“We have some young people who have made really good progress and they’re now able to support with the commercial bakes as well,” she explains. “This means they’ve developed the bakery skills, food safety levels and personal hygiene levels to work alongside the bakery team as colleagues.” 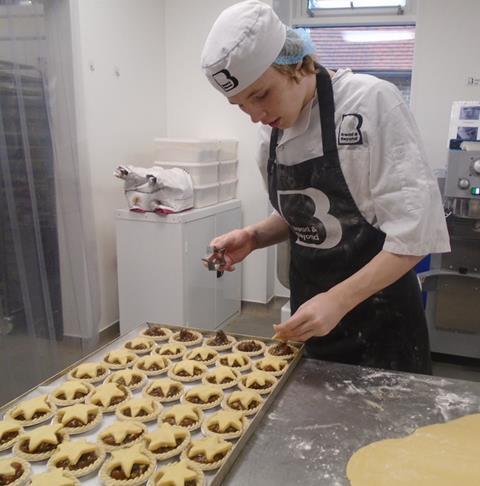 More than 30 young people aged 16-25 have been involved with the bakery since its inception in 2019, which sees the commercial team – headed up by artisan bakery manager Dylan Needham and night baker Thompson – bake first thing with up to three training sessions taking place during the day.

Needham has been with the team from the beginning while Thompson, who is completing his NVQ Level 2 Diploma in Baking, joined at the end of 2019 having previously spent five years working in a Sainsbury’s in-store bakery.

Here, they craft a range of speciality breads, such as white and rye sourdough, focaccia, oat & barley loaves and a multigrain malthouse, as well as sweet treats including cinnamon whirls, chocolate chip shortbread and seasonal bakes of hot cross buns and mince pies.

As a commercial bakery, Bread & Beyond supplies farm shops, retailers and cafes as well as schools and nurseries although Evans notes that some of these contracts have been hit due to Covid-19.

However, it was able to supply the Prior’s Court’s residential homes, its main kitchen and more than 500 staff with bread and baked goods throughout.

Like businesses and schools across the country, other areas of the bakery’s operations have been hampered by the current global situation.

“The reality is right now we’re not doing as many sessions for our young people as we’d like to. But every single young person who was a regular trainee has continued to access at least one session a week in the bakery,” explains Ruth Over, senior project leader at Prior’s Court. 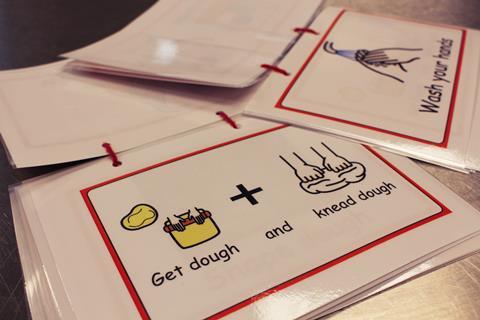 Flash cards used by the bakery trainees at Bread & Beyond

Young people engaged with the bakery are assessed via a scheme called ‘I Can’. Developed by Bread & Beyond, it covers 14 areas of baking from measuring and weighing to kneading bread, operating the oven, and packaging goods ready for sale and distribution.

“We developed the I Can assessment system because there isn’t anything out there that meets the complex needs of our young people,” Over adds. At the lower end of the scale is encounter level (where the young person is simply in the bakery) to active involvement through to mastered.

The idea behind it is to develop transferable bakery skills for some of the young people with the view to gaining employment opportunities either in Bread & Beyond or elsewhere in the future.

“The routine, the structure and hands on approach and the fact we can visually structure it for them – it all helps. Some skills you take for granted. One of the skills for commercial bakes is knowing the right amount of pressure to use can take some of our young people weeks or months to learn.”

One of the next steps as part of this process is formal accreditation. Bread & Beyond has started this journey by thinking about applicable modules and what the course might look like but needs help. 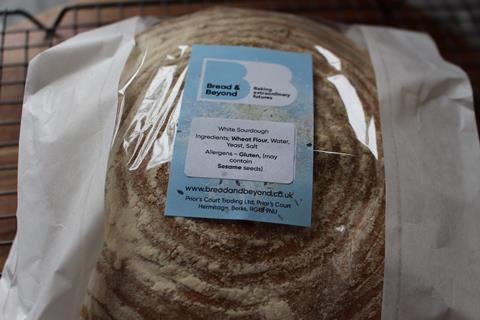 A sourdough loaf produced by the bakery

Work experience and employment opportunities are also on the agenda as part of this. Over’s plea to the baking industry is that people be “open minded and flexible” as this could help to address the autism employment gap.

“Our young people work very hard in the bakery,” she says, but notes a few hurdles to getting them experience outside of Bread & Beyond including traditional recruitment methods.

“One of our young people would not do very well in interview – some of our non-verbal people won’t have any access to that – but they can do a workplace assessment, they can do a trial. So being open to things like that would be really welcome,” she explains. “You may have to think a little bit more before they come in but if you get it set up right then it really works.”

As such, Bread & Beyond is keen to hear of any bakeries in its local area (and further afield) which could help – post-pandemic, of course.

“Anyone that thinks they can offer even a couple of hours a week or a fortnight to one of our young people would be amazing. It allows us to generalise their skills and it would really test our model,” says Evans.

Those interested would be supported by a job coach, who would accompany the young person, and would also be welcome to visit Bread & Beyond to see the bakery and young person’s skills in action. It can also offer advice on how to make things more accessible for those with autism.

Another area of exploration which has been on the cards for a while is a franchise model. Bread & Beyond has had a “huge amount of interest” from UK-based organisations as well as one in the US that would like to partner with them, but Covid has pressed pause on this.

“We have an operations manual and a training manual as part of that model. That means we can potentially support other organisations to replicate what we do,” adds Over.

To see more of Bread & Beyond and the trainee bakers, watch this interview with the bakery job coach Laura Parker below: