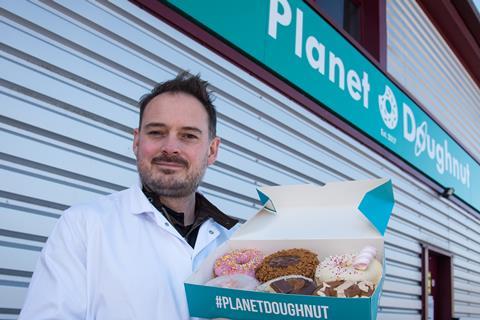 Planet Doughnut has moved into a new production base and is recruiting more staff after receiving £114,800 from the Marches Building Investment Grant (MBIG).

The Shropshire bakery, which supplies Plant Doughnut retail outlets in Shrewsbury and Telford, will operate 24-hour production at the Battlefield bakery as part of its expansion drive.

Duncan McGregor – who set up the business in 2017 with his wife Samantha – said more than 10 jobs would be created by the summer and revealed plans to increase the wholesale distribution of pre-packed doughnuts with both major and independent retailers.

“We expect turnover at the bakery to reach £750,000 this year and to be employing 32 people there,” he said. “The move to the new production base is vital to help with that growth.”

McGregor described the MBIG grant as a “huge help” towards the cost of the new bakery. “The process of applying for and obtaining the funds, with the support of the Marches Growth Hub, was very straightforward,” he added.

The MBIG programme, which is delivered by Herefordshire Council, offers grants of up to £150,000 to help meet the cost of building new premises or extending and reconfiguring existing ones. It is part-funded by the European Regional Development Fund and supported by the Marches LEP and Marches Growth Hub.

“Planet Doughnut has made a huge impact on the area in just a few short years, and we are delighted to have been able to help with the move to the new bakery on Knights Way in Battlefield,” said programme manager Caroline Cattle. “The move means that the bakery can continue to expand and create new jobs and even more people can enjoy the taste of its products.”

Gill Hamer, Marches LEP chief executive, added: “I am delighted that we have been able to help Planet Doughnut in this way. The company has quickly become a well-known name throughout the region and the move to a new bakery can only help build on that success.”