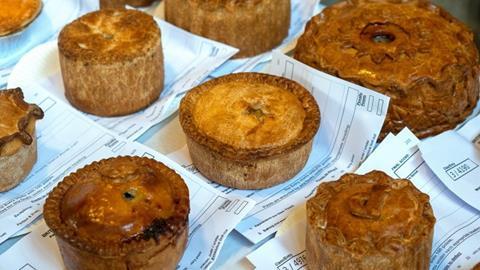 It beat nearly 900 pies – entered by 160 professional bakers, butchers and chefs from across the UK – in 23 classes (see full list below) to claim the ultimate accolade and marks a “return to tradition” after a vegan pie was controversially crowned the winner last year.

The awards mark the crescendo of British Pie Week, which has seen activity from a pie-markers across the country as well as a number of trends highlighted.

“The pastry had an even thickness, with a crunchy rich texture. The filling was well balanced between meat and cheese which gave a subtle taste and the meat, though tender, still having ‘bite’. Overall a cracking pie,” said chief judge Colin Woodhead of the Supreme Champion.

West Sussex-based Turner’s Pies, which previously topped the awards in 2018, also won Class Champion in the Beef & Cheese Pie Class, picking up a full baker’s dozen of awards in total this year.