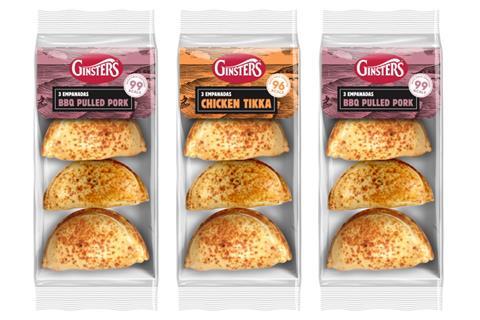 Ginsters has expanded its range of snacking products with two world flavour-inspired empanadas.

The BBQ Pulled Pork and Chicken Tikka empanadas will be available from 20 July with an rsp of £1.50 for a two-pack and £2 for a three-pack.

Each empanada has less than 100 calories, Ginsters added.

Traditionally, empanadas are a Spanish or Latin-American delicacy, but Ginsters has put its own twist on the savoury pastry to ‘capitalise on trend-setting flavours’ that are popular with UK consumers.

“By combining flavour trends with more consumer variety, the launch will help to broaden the appeal of savoury pastry,” he said.

“It celebrates the culinary connection between the pasty and empanada and, as the UK’s number one pasty maker, is a natural move in innovation that we are bringing to the category.”