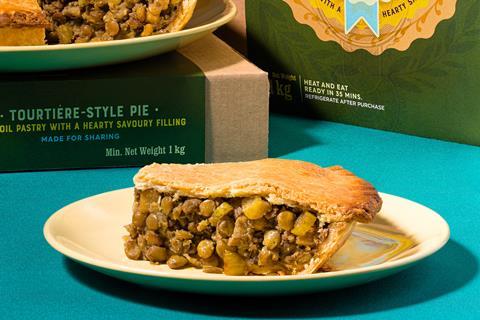 The firm makes plant-based sharing pies inspired by the classic French-Canadian Tourtière, a pie which does not have gravy inside and is best eaten with condiments.

The nine-inch pies are made with an olive oil crust and a filling of green lentils flavoured with Bramley apple, onion, celery, mushroom and potato, seasoned with aromatic spices.

Their recipe was evolved from a dish discovered in the pages of the family recipe book of Milly Pearl O’Shea, the grandmother of Grateful Pies founder Farika Holden.

Grateful Pies are initially available at independent London retailers, with nationwide distribution due to be in place by February next year.

“Grateful Pies are an all-inclusive alternative to the traditional meat dishes that have historically featured as the centrepiece of the table and are the perfect communal food, particularly being plant-based,” Holden said.