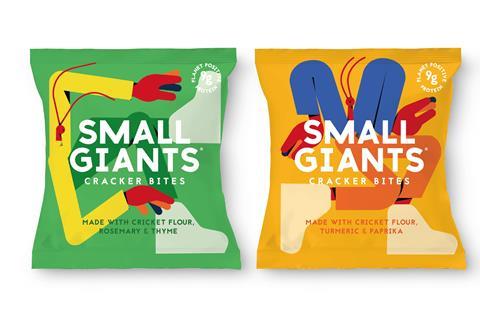 A new brand of crackers containing 15% cricket flour will be launching on Amazon in October.

Small Giant Crackers will be rolling out in 40g packs (rsp: £1.50) in three flavours: tomato & oregano, turmeric & smoked paprika and rosemary & thyme. The cricket powder in the products is farmed in Thailand and sourced from a British supplier.

The brand was founded by Edoardo Imparato and Francesco Majno, who launched the Crické cricket powder snacking brand last year and have now raised £150,000 investment to create the Small Giants brand identity and product range.

Majno claimed Small Giant Crackers were the best way to try insects for the first time.

“While people are starting to understand the reasons to include edible insects in their diet, they may be put off by the yuck-factor, but once people try our revolutionary snacks they love the taste and the taboo is broken,” he said.

“As attitudes towards edible insects are changing, we want to bring excitement, innovation and new consumers to the savoury snacks market, which has seen little change in recent years.”

A major part of the brand’s positioning is as a way of helping consumers reduce consumption of animal-based foods and find an alternative source of protein.

The launch comes as interest in the use of insect-based protein is growing in the bakery industry.

Roberts caused a stir last year when it launched a limited-edition loaf made with cricket flour. Each Crunchy Cricket Loaf contained around 336 crickets that were dried, ground, mixed with wheat flour and grains and baked to become a “tremendously tasty loaf with a crunchy finish”.