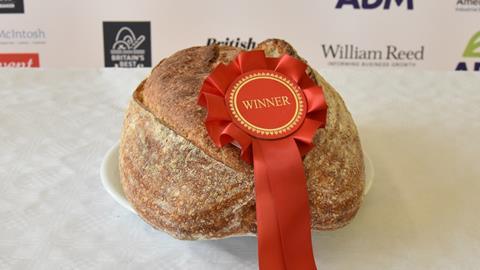 You’d be forgiven for questioning how a chocolate shop secured top place in the Plain Sourdough category at Britain’s Best Loaf 2020, but that’s exactly what Ten Watch Chocolates did.

Despite the name, sourdough is one of the core elements of the Antrim-based business.

“I’m a baker by trade,” explains owner Lawri Dowie, who currently runs the business from home while also working part time at a local wholesale bakery, Zac’s Bakehouse. “I was trying to set up a commercial premise [for Ten Watch Chocolates] but Covid got in the way.

“The idea would be to have the bakery downstairs and the chocolate upstairs. The chocolate would be retail and the bread would be wholesale.”

Dowie entered the artisan sourdough into Britain’s Best Loaf at the start of 2020, back when the competition – which was sponsored by ADM, American Pan UK and Scobie McIntosh/Revent – was due to take place at the Birmingham NEC.

“I had originally planned to bake the loaves overnight, or early in the morning, and fly over to the food shows and bring the bread over with me fresh,” he explains. “This time I had to bake it the day before and post it so I was very concerned about the condition it would arrive in. I was very diligent with the packaging to make sure it could survive a rough delivery driver.”

Despite the logistical challenges, Dowie was confident in the loaf.

I had to bake it the day before and post it so I was very concerned about the condition it would arrive in. I was very diligent with the packaging to make sure it could survive a rough delivery driver

“I’ve entered the sourdough before, but wasn’t really happy with the result, so I knew it wasn’t going to win. It was nothing to do with the recipe, just slight mistakes when I was making the loaves,” he notes. “This year I was confident, but I was still surprised to win.”

The recipe for the artisan sourdough started life in 2012 as part of another competition during Dowie’s time at bakery college. “The base recipe has been adjusted and tweaked over the years as I’ve learned more and developed as a baker,” he says. “It probably looks nothing like the original recipe, but it is a variation of the one I made in college.”

It has evolved over the years and now comprises organic strong white flour and 10% stoneground wholemeal. The wholemeal adds flavour and texture, Dowie says.

“To start, I mix the flour and water together and let that autolyse for an hour. Then I add the starter, salt and mix it. Then it’s bulked for five hours before being shaped and placed in baskets. It gets an hour at room temperature and then 18 hours in the fridge, which is handy for baking the next day.”

The loaf was praised by the judges for its great appearance, open and even structure and well-rounded aroma which complemented the slightly sour taste.

“I was very happy for it to win the category,” Dowie says. The Britain’s Best Loaf trophy is proudly displayed alongside Dowie’s other accolades.

Dowie is already gearing up to enter Britain’s Best Loaf 2021 with variations of his award-winning sourdough, including a spelt & stout loaf.