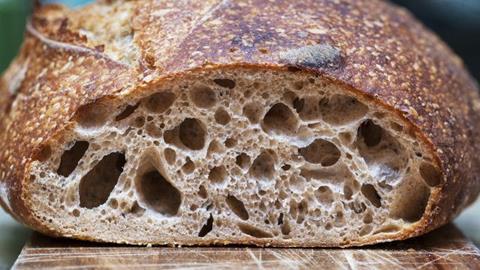 Proposals designed to define labelling and marketing terms for sourdough have been presented for discussion with the Department for Environment, Food & Rural Affairs (Defra).

The UK Baking Industry Code of Practice for the Labelling of Sourdough Bread & Rolls has been drawn up by the Association of Bakery Ingredient Manufacturers (ABIM), The British Sandwich and Food To Go Association, Craft Bakers’ Association, the Federation of Bakers, and PAPA (Pizza, Pasta and Italian Food Association).

The proposal described the main raw materials for producing a sourdough as “flour and water, with the optional addition of a culture: the further key element is time”.

It also stated that: “Where space and skills are lacking, bakers have recourse to an increasing number of ingredients and raw materials that help to simplify the process; allowing them to offer bread products that include an element of sourdough to their customers.”

The code added it was important differentiation was made between methods of production so “due recognition may be given to the skilled craftsman, and that the integrity of the term ‘sourdough’ may be maintained as a product descriptor”.

“There are, as yet, no regulations or codes of practice in the UK that govern the nature, production and labelling of sourdough products in the UK market,” stated the proposal.

“A unique opportunity exists for the industry itself to agree on terms and definitions that are mutually beneficial to producers and consumers alike, thus militating against potentially misleading labelling information whilst preserving the integrity of the definition of ‘sourdough’ and ‘Sourdough bread’ and the methods by which they are produced.”

Three definitions have been suggested for labelling and marketing purposes:

The proposal has come under fire from The Real Bread Campaign, which claimed that, in its current form, it would allow producers to ‘hijack’ the word sourdough. The campaign also said it had been drawn up without consulting “the majority of Britain’s genuinesourdough bakers, shoppers or consumer organisations”.

“The proposed code of practice includes three different uses of the word sourdough, and ‘where space and skills are lacking’ would permit the use of so-called processing aids (which would not appear in ingredient lists), other additives, baker’s yeast and other leavening agents ‘that help to simplify the process.’ None of these is used in making genuine sourdough bread,” stated the Real Bread Campaign. “We believe that the proposed code undermines the integrity of the word sourdough, with muddled meanings that would make things more, not less, confusing for shoppers.”

ABIM responded that it and the Real Bread Campaign have the best interests of consumers at heart and that both groups are working to provide the correct information to help consumers make informed choices and to produce the best possible bread for all.

"The production of sourdough and bread involves both tradition and science; and to describe it objectively, accurately and clearly requires language understood by both disciplines, which makes this a challenging task," stated ABIM.

"The current version of the proposed code of practice represents the best expression of that balance that we’ve been able to find today. We welcome the possibility to further refine this document through discussion with other interested parties including, but not exclusively, Defra.”

The Federation of Bakers confirmed the draft code of practice had been presented to Defra.

“We look forward to discussing it with Defra as an important step in helping with labelling sourdough, following guidelines which have been established in other EU countries,” said Federation of Bakers chief executive Gordon Polson.