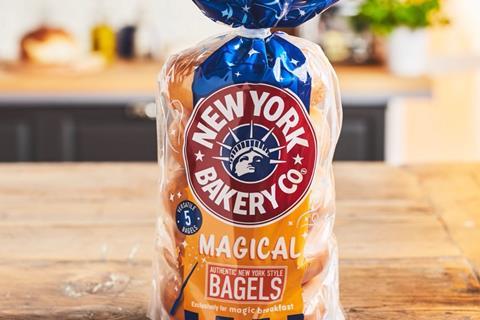 New York Bakery Co is donating half a million bagels to charity Magic Breakfast in a drive to tackle child morning hunger.

The 500,000 New York-style bagels will be sent to children who are deemed most at risk of starting their day hungry.

As part of the initiative, brightly coloured, magic-themed New York Bakery Co bagel packs have been designed and made exclusive to Magic Breakfast, which has been announced as the brand’s key charity partner from 2021 onwards.

New York Bakery Co said the partnership was about ‘stepping up its renewed commitment to support local communities in need across the UK’.

“We know the importance of breakfast for children and are passionately committed to helping Magic Breakfast reach more children at risk of hunger, which is why we’re donating 500,000 ‘magical’ Bagels to those who need them most,” said Christina Honigfort, head of marketing at New York Bakery Co.

Magic Breakfast works with over 1,000 partner schools in disadvantaged areas of the country, providing food to around 170,000 children each school day. The charity said it is using its 20th anniversary year to ‘highlight the scale of need and the proven effectiveness of the Magic Breakfast model’, as well as calling for urgency in solving the issue for good.

“As many as 1.7 million children are at risk of hunger in the UK and we need to act now,” said Emily Wilkie, head of fundraising at Magic Breakfast.

“The effects and benefits of a healthy breakfast truly are magical and can be life-changing and we’re very thankful to New York Bakery Co for helping us to ensure no child starts their day too hungry to learn,” she added.

The partnership will be supported by a dedicated #MakeMorningsMagic campaign spanning PR and social media. In addition, chef and food writer Gizzi Erskine is backing the initiative to help raise awareness and provide ‘magical’ bagel-based serving suggestions.