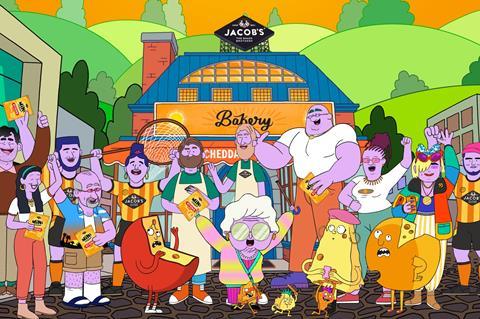 Pladis has launched a £4.5m advertising campaign for its Jacob’s Mini Cheddars brand.

The seven-week ‘Welcome to Cheddar Town’ campaign features a new TV creative, launched on Channel 4, as well as amplification on social media. The brand will also be sponsoring ‘Friday nights in on 4’, running a series of bespoke idents from the campaign across Channel 4’s Friday night schedule for six weeks.

The ‘Welcome to Cheddar Town’ platform will be built upon through a series of sponsorship creatives and social media assets, Pladis said.

The campaign aims to bolster the brand’s relevancy among 25- to 45-year-olds, which according to Nielsen data has already grown by 8% year on year.

“This new campaign marks the start of a huge year for Jacob’s Mini Cheddars where we’re aiming to reignite brand love by playing on the distinctive bright and fun nature of the brand with a playful new TV creative,” said Christopher Owen, marketing controller at Pladis UK&I.

“Mini Cheddars Sticks are now also available in Co-op and Morrisons, and we’re continuing to build on the success of the launch by spotlighting them within the ‘Welcome to Cheddar Town’ campaign – just in time for the range also hitting Asda and Sainsbury’s shelves over the following weeks,” Owen added.