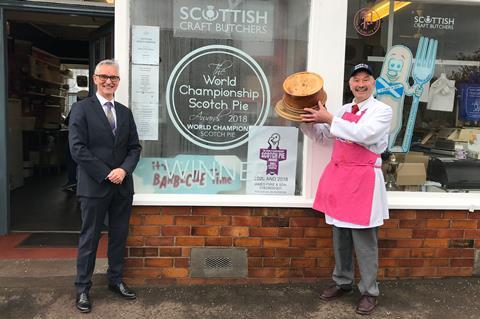 Scottish Bakers’ Alasdair Smith and Alan Pirie with the trophy

James Pirie & Son has been crowned the first ever World Scotch Pie Champion of Champions.

The competition, organised by trade body Scottish Bakers, took a different format for 2021 only with previous winners being invited to submit their winning pies to be crowned the ultimate champion.

Newtyle-based butcher James Pirie & Son won the World Championship Scotch Pie Awards in 2020 and again in 2018 with its Scotch Pie.

“I was delighted to have won the competition twice but to have been judged alongside literally the best pies in the land and to have come out on top is beyond my wildest dreams,” said Alan Pirie.

“I really do make the best Scotch Pies in the world. This is just fantastic news and will be a huge boost to the business after a year of continuing to serve our community with fresh produce through difficult circumstances for us all.”

The other companies, which have won in previous years and entered in 2021, were:

“It is important to say that each and every pie that was entered on judging day is a winning pie having taken the title in recent years,” said Scottish Bakers chief executive, Alasdair Smith.

“So, the judges really were spoilt for choice on judging day. But head judge Ian Nelson and Paul Long from our partner sponsor Bako Northern and Scotland took their time and gave judging their all. And it was a close-run thing let me tell you, but the best pie won out on the day.” 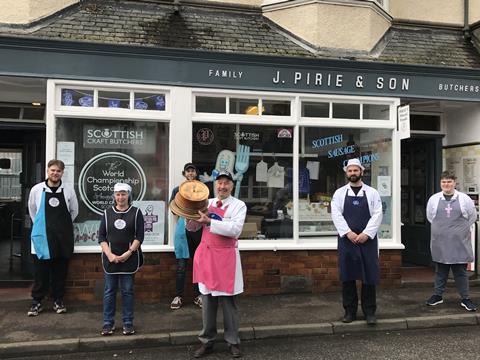 The team at James Pirie & Son with the trophy