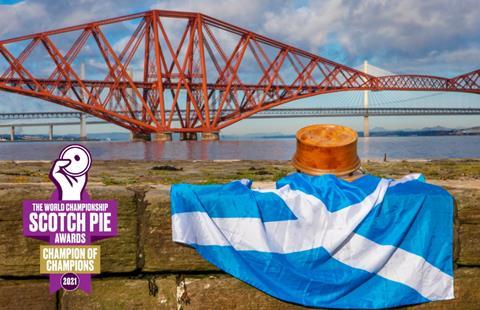 The World Championship Scotch Pie Awards is taking place in 2021, Scottish Bakers has confirmed, but it is changing the format due to Covid-19 restrictions.

Normally, the competition see professional pie-makers, butchers and bakers enter their products in several categories for judging. Winners are then announced in the categories, which have included sausage rolls, macaroni pies, Scotch pies and apple pies.

For the 2021 competition, Scottish Bakers is searching for the ‘champion of champions’ as it invites all previous World Scotch Pie Champions to submit their pies for socially distanced blind judging.

Previous winners include two-time champion James Pirie & Son, which topped the competition in 2020 and 2018, as well as Thos Auld & Sons from Greenock, Boghall Butchers from Boghall and The Little Bakery from Dumfries, which claimed the title in 2019.

The judging team will be led by Ian Nelson, as well as Paul Long from sponsor Bako North Western Group. An independent auditor will be on hand to oversee proceedings and ‘ensure fairness all round’.

“Restrictions in place to combat Covid mean that our annual November judging day was not possible and neither was the awards lunch in January. So we have taken the decision to run the competition, but with some changes for this year to ensure the awards retain their place in the annual calendar,” said Alasdair Smith, chief executive of Scottish Bakers.

“In these difficult times, it is more important than ever to recognise the traditional skills and hard work that goes in to develop and produce a truly iconic Scottish product. We look forward to seeing the past champions of butchers, bakers and all pie makers, do battle to see who will be crowned the best of the best,” said Gordon King, executive manager of Scottish Craft Butchers.