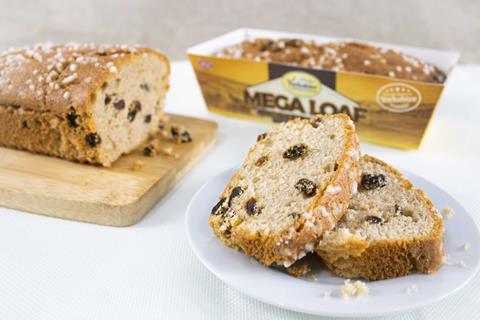 Bakery brands and retailers are making it easy for loved ones to show how much some-bunny means to them with an array of Easter-themed treats.

From Hot Cross Yumnuts and extravagant cakes to vegan mini loaves and gingerbread, there’s plenty to rabbit on about.

As an Easter bakery staple, hot cross buns are already flying off the shelves with the UK’s largest retailers offering traditional ones alongside some more innovative flavours.

Here’s our pick of some other seasonal creations now on sale: 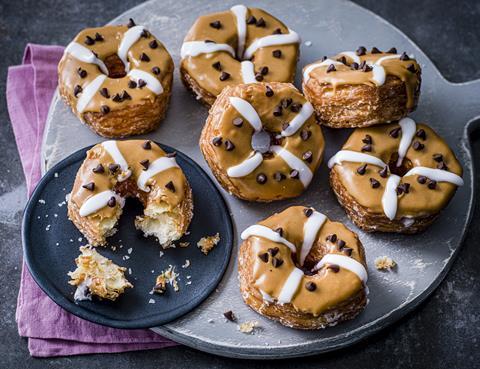 Marks & Spencer has taken hot cross buns one step further with the invention of a Hot Cross Yumnut. The seasonal twist on the retailer’s signature doughnut and yum yum hybrid is made with a light textured dough that is rested for a minimum of 18 hours. It features a mixed spice fondant topping with flavours of cinnamon, nutmeg and ginger, and is crossed with a white fondant icing and milk chocolate chips.

The product is being sold individually for £1.50 or in a pack of three for £4. The NPD joins the existing six-strong Yumnut line-up which includes Raspberry Royal, Billionaires and Plain Jane.

The Yorkshire Baking Company has also joined in with the HCB celebrations with a limited edition Hot Cross Bun Mega Loaf. The fruity sharing-sized bake is based on a traditional hot cross bun recipe and contains sultanas, fruit peel and mixed spices. It is available online and in Morrisons with an rsp of £2-£2.25. 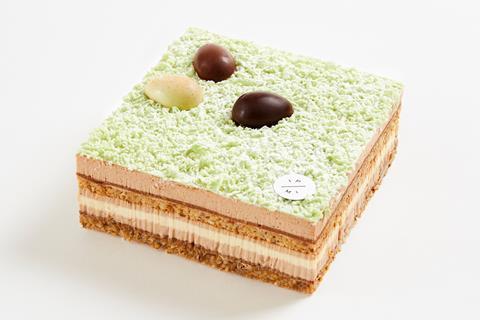 Pierre Marcolini has added a centrepiece cake and Amaretti biscuits to its Easter line-up this year.

The £25 dessert is made with milk chocolate sabayon, vanilla crème brûlée, and caramelised hazelnut crunch wrapped in a coat of chocolate. Designed to depict a green glade where bunnies may play, the topping is finished with petit praline eggs.

The chocolatier has also crafted Amaretti biscuits. Described as light with a gentle tang of lemon, they are being sold in packets of 100g for £7.80. Both items are available from the Pierre Marcolini Marylebone Boutique counters in Selfridges, Harrods and via the E.boutique!

“The impressive results delivered by the Cadbury Crème Egg range in previous years have presented us with an exciting opportunity to further extend this range, taking it to both individual and sharing formats we know work well already for our Mini Egg themed skus,” said Mathew Bird, brand director of sweet treats at Premier Foods. 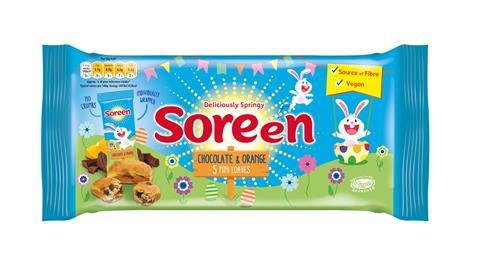 Vegans now have a chance to enjoy Soreen’s Chocolate & Orange Spring Mini Loaves which have undergone a plant-based makeover in time for Easter. The product is said to contain 50% less sugar and 64% less fat than an average Easter cake bar.

“We have been working hard to launch a full vegan range, ensuring to retain that squidgy texture and treat-like taste that Soreen is notorious for,” Mark Simester, said Soreen managing director.

“The results from our taste panel sessions have been a huge success and we’re pleased to be able to offer an even wider range of vegan products this year.”

The individually wrapped mini-loaves are being sold in multipacks of five and are available from retailers including Nisa, Iceland, and Sainsbury’s for £1.The move comes after the malt loaf brand announced in January that the vast majority of its products would become vegan-friendly in 2021. 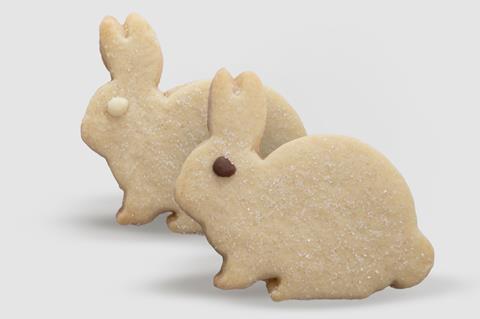 The East Midlands’ craft baker Birds Bakery is putting on an egg-cellent display for Easter with hot cross buns, custard tarts, chocolate biscuits and cupcakes among the favourites making a return.