Finsbury Foods and Bosh team up for vegan cakes 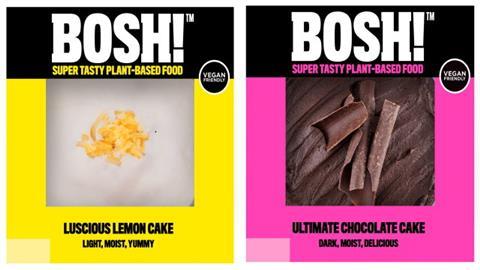 Finsbury Food Group has partnered with YouTube stars and vegan authors Bosh to develop its first range of vegan cakes.

Founded by Henry Firth and Ian Theasby, Bosh is described as the world’s most-viewed vegan and plant-based recipe channel. The pair have appeared on numerous TV shows and written four books, including the first vegan cookbook to reach number one in the Sunday Times bestsellers chart.

“We want to make plant-based diets and foods more appealing, accessible and available to everyone, and that includes treats like cake,” said Firth.

“We are so excited to launch our first cake range and couldn’t think of a better partner than Finsbury Food Group, which prides itself on quality and taste,” added Theasby.

Registered by The Vegan Society, the range has been developed in response to the rising demand for more vegan and vegetarian options in supermarkets. There were 3.2 billion plant-based meals made in 2019, which is a 17% increase since 2016, according to analysts Kantar.

“By partnering with Bosh, we can offer a solution to a problem we know customers and retailers alike have faced for some time, and we are excited by the prospect of expanding this range in the future.”

The sharing cakes are available in Tesco now and Asda from 13 July, along with the Chocolate Happy Birthday cake.