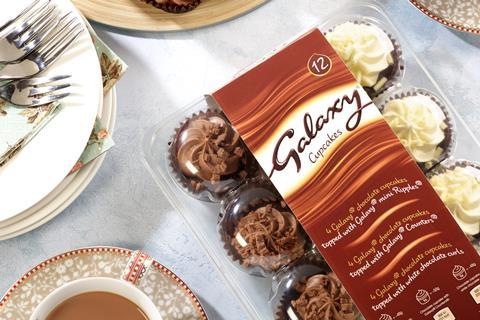 Mars has expanded its cake range with a Galaxy cupcake platter.

Each platter contains 12 Galaxy chocolate cupcakes, which comprise a light chocolate sponge and creamy frosting, with three different variants – one topped with mini Galaxy Ripples, one with Galaxy Counters and one with white chocolate curls on top.

They’re available in Asda with an rsp of £8 per platter.

There have been several cupcake platters launched in the past year or so with ties to established chocolate brands. Premier Foods, for example, expanded its Cadbury range by taking Oreo and Freddo into the format for the first time in March last year, while cake manufacturer BBF teamed up with Nestlé Professional to launch Rolo cupcakes in October.