Greggs and Pret among bakeries to reveal recipes 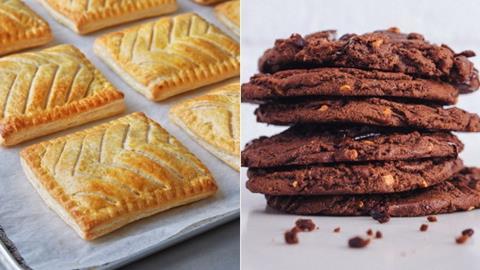 Greggs, Pret and Pizza Express are among companies revealing previously secret recipes to help home bakers enjoy a taste of their favourite dishes while in lockdown.

Here, we’ve rounded up some of them to satisfy your baking curiosity.

Having been bombarded with tweets demanding the recipe for its Dark Chocolate Vegan Cookies, Pret finally gave people what they were asking for.

The recipe has been published on the chain’s website and social media alongside ones for its Dark Chocolate Chunk Cookies, a selection of soups, porridge and cold drinks, as well as advice on creating the perfect sandwich in what Pret has dubbed #SandwichSeminars.

Top tips for sandwiches include embracing the five elements – type of bread, hero ingredient, sauce or spread, crunch and the ‘je ne sais quoi’ – and assembly to avoid a soggy sandwich.

Yorkshire-based Thomas the Baker has unveiled the recipe for its popular Country Crunch Bread and is selling flour for novice bakers who are unable to get it in the supermarkets.

“The golden rule for good homemade bread is to take your time – a good loaf can’t be rushed; it needs time and attention to allow it to prove well to develop flavour and texture.

“Kneading the dough is something that can’t be rushed, whether that’s in a mixer or by hand, so spending time here is essential,” said general manager Simon Thomas.

“And a little secret baker’s tip for an excellent homemade loaf – a spritz of water into the oven as you pop the dough in will help to develop a good crust.”

Here’s what you need to make Country Crunch Bread:

Forget DIY, Greggs has coined the term GIY – that’s Greggs It Yourself.

With all its stores closed, Greggs is serving up easy-to-follow recipes on Facebook, allowing its fans to enjoy a taste of their famous hot pastries from the comfort of home.

Recipes released so far are the Sausage, Bean and Cheese Melt and the famous Steak Bake.

Pizza Express took to Twitter to reveal its coveted dough ball recipe to the masses.

In a series of tweets, the pizza chain outlined the step-by-step process required to achieve dough ball perfection (see below). Since then, the business has offered ways to pimp the dough balls, including stuffing them with bacon and cheese as well as baking them parmigiana style.

Here’s what you need to make dough balls: