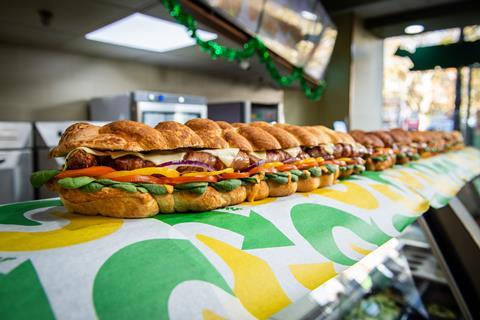 Subway has expanded its festive menu with a 6ft pig in blanket sandwich.

Also known as the Tiger Pig Sub, it contains 36 pigs in blankets, 64 slices of American cheese, 24 slices of red onion, 96 slices of tomato and 96 slices of mixed peppers.

The festive sandwich also features crusty tiger bread – which was first trialled in selected stores earlier this year before becoming a permanent addition to the range – spinach and southwest sauce.

It will be the largest festive sandwich on the high street, Subway claimed. The Tiger Pig Sub, which launched nationwide last month in a six-inch and footlong, is set to become the franchise’s best-selling festive sub, it added.

The XL 6ft Tiger Pig in Blanket Sub will be trialled in a handful of stores from 9 December. Consumers will be able to find the sandwich in Manchester, London and Northern Ireland. It will also be available for pre-order collection, while stocks last.

Pigs in blankets are a favourite sandwich filling this year and feature heavily across other outlets’ Christmas sandwiches, including Pret, Caffè Nero and Aldi.