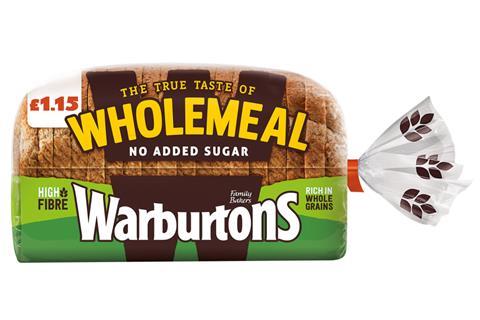 The Advertising Standards Agency (ASA) has dismissed a complaint filed by the Real Bread Campaign over the terminology used in Warburtons’ social media posts.

Appearing on the brand’s Instagram feed in February 2021, the two posts in question featured the text “100 wholemeal no added sugar” and “Guess what’s hiding in other loaves?” alongside an image of a spoonful of sugar, respectively. Both had a pack shot of the Warburtons wholemeal loaf.

In response, Warburtons said the primary purpose of the campaign was to highlight the fact that its wholemeal loaf didn’t contain any added sugar and was not implying that wholemeal loaves made by its competitors were not 100% wholemeal – it was simply a description of the product. Instead, the posts were designed to highlight the use of added sugar in some competitor products, examples of which were provided to the ASA.

Following a review, the ASA did not uphold the complaint while the other was ‘informally resolved’ after Warburtons agreed to amend its advertising.

“We considered consumers were also unlikely to interpret ‘100% wholemeal’ to mean that because there was no added sugar, the loaf only contained wholemeal flour and no other ingredients. We considered consumers were unlikely to take such a literal view and would understand that loaves were likely to contain other key ingredients in addition to flour, such as salt and water,” it stated.

The ASA also noted that both ads referred to ‘taste’ with phrases “Try the true taste of wholemeal” and “We think the truest tasting wholemeal is the tastiest”. In the context of the ads, the agency believed consumers were likely to interpret the claims to mean the product had “a less adulterated or purer taste compared to loaves with added sugar which created a sweetness that might mask some of the wholemeal taste”. “We concluded that the claims were not misleading,” it added.

Real Bread Campaign co-ordinator Chris Young said he was “deeply disappointed” by the ruling. “We believe the advertisements were intended to lead shoppers to believe that this product was not only better than other industrial loaves, but somehow better than wholemeal bread as well,” he said.