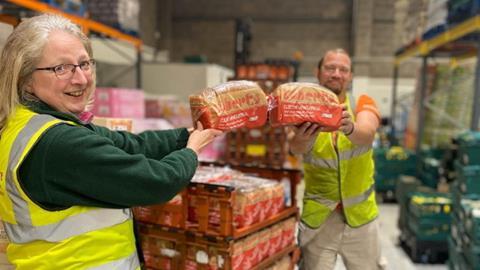 Roberts Bakery has teamed up with hunger fighting and food waste charity FareShare to help feed those that are most vulnerable during the Covid-19 outbreak.

It comes shortly after the charity appealed to the food industry to “step up” and divert more surplus and donated food to charity, particularly as demand for Fareshare’s services have increased during the coronavirus outbreak.

In response, the bakery has made its first weekly delivery of 800 loaves to four FareShare depots, which will then be redistributed to frontline charities.

“Times are tough for everyone, and especially so for the most vulnerable in our communities who rely on FareShare to feed them and their families. We simply had to get involved by supporting them in the tremendously important work they undertake,” said Roberts Bakery managing director Stuart Spencer-Calnan.

“We’re delighted we’re able to do our bit by donating such a daily staple as bread. We hope to see many more manufacturers and retailers support the charity’s appeal.”

Alyson Walsh, FareShare commercial director, added: “We’re incredibly grateful for Roberts Bakery’s generous donation of bread during this crisis, which will be sent to organisations getting food onto the plates of vulnerable people, as well as onto the doorsteps of people with serious health conditions and families facing financial hardship.”

Other bakeries and suppliers have joined in the efforts during recent weeks to help keep the nation fed. Morrisons, for example, has been running its bakery, egg and fruit & vegetable packing site for an extra hour every day to prepare and pack food for food banks, while Toast Ale is donating meals for every bottle of its beer, made from surplus bread, that is sold.