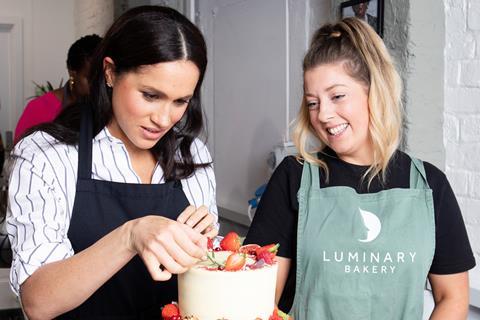 London-based Luminary Bakery has won a Queen’s Award for Enterprise in the Promoting Opportunity category.

The social enterprise bakery, which has branches in Camden and Hackney, uses baking as tool to create jobs for socially disadvantaged women and equip them with transferable skills for the working world.

Luminary Bakery is among 205 businesses from across the UK to have been named as recipients of the 2021 Queen’s Award for Enterprise. The awards, which have been running since 1966, were this year given for innovation, international trade and sustainable development, as well as promoting opportunity through social mobility.

Celebrating the news, the bakery tweeted it was ‘so excited’ to win the award, which is valid for five years.

“We want to say a huge well done to all of our team who work incredibly hard to support our mission and who strive every day to make Luminary’s vision a reality,” it added.

As a Queen’s Award winner, Luminary Bakery is permitted to fly the Queen’s Awards flag at its main office and use the emblem on its marketing materials. The bakery will also be given an official Grant of Appointment certificate and a crystal trophy.

“This year’s Queen’s Awards are about celebrating businesses that have supported people in their communities by helping them to turn their lives around and gain key skills and experience,” said Paul Scully, small business minister.

“London’s Luminary Bakery is a truly inspiring example of a social enterprise, helping women who have survived abuse and trauma to recover from what they’ve been through, regain their independence and flourish.”

Rachel Stonehouse, head bakery trainer for Luminary, featured recently in a British Baker interview on women leading the way in the industry.

In November 2019 Megan Markle, the Duchess of Sussex, visited the company’s bakery and training centre in Camden (pictured), and later sent a handwritten note to Luminary, praising it for its work.