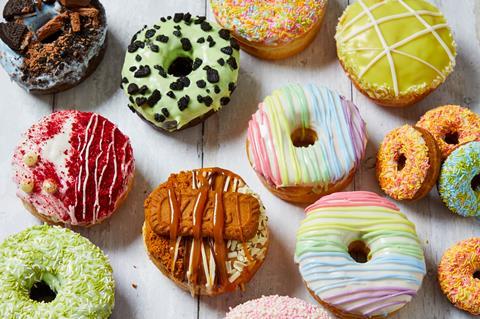 National Doughnut Week 2022 will take place during 7-15 May, with charity The Children’s Trust once again benefiting from funds raised.

National Doughnut Week, sponsored by CSM Ingredients, was launched in 1992 by Christopher Freeman, co-owner of Dunns Bakery. Since then, bakers, cafés, delis and other small businesses around the UK have embraced the charity drive with various doughnut-themed fundraising activities. The Children’s Trust has been the recipient of these efforts since 2005, so far receiving over £507,000.

“When we started National Doughnut Week our goal was simple – for bakers to raise as much money as they could by selling one of the UK’s favourite treats,” said Freeman. “We’ve been doing that now for 30 years and to reach the £1m milestone in this special year really is remarkable.

“I want to thank all the businesses that have supported us throughout the years. It really means a lot to us, and of course to The Children’s Trust who have benefited with over half a million pounds donated to such a worthwhile cause,” he added.

Cristiana Ballarini, CSM Ingredients activation director west, south & international, congratulated Freeman on the event’s fundraising success. “It’s remarkable that so much money has been raised and it’s the support of the businesses that take part that make it happen. Thank you to everyone and to all the customers that have bought a doughnut,” She said.