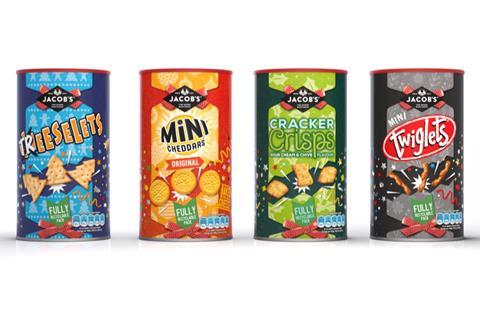 Pladis has made the caddies that house its Jacob’s Mini Cheddars and Cheeselets fully recyclable.

The new paper-based 200g snacking tubes will also roll out across Jacob’s Cracker Crisps and Twiglets later this year.

The company said the move formed part of a wider goal to make all its packaging recyclable, reusable or compostable by 2025, which could save up to 600 tonnes of packaging ending up in landfill every year.

Scott Snell, vice president of customer at Pladis UK & Ireland, described the development of sustainable packaging across its bestselling lines as a “huge business priority”.

“Our Jacob’s caddies are some of the most popular sharing snacking products in the market and the new, fully-recyclable paperboard containers will help us make a difference, giving shoppers peace of mind when disposing of the packaging in their household recycling bins,” he said.

In February, Pladis pledged to remove black plastic from its on-shelf portfolio by June 2021 and eliminate all PVDC film by the same date.

Last year, Jacob’s Mini Cheddars reduced the height and board grade of its outer packaging, which Pladis claimed would help remove trucks from the road and reduce its CO2 emissions by 127 tonnes per year.

Pladis-owned McVitie’s also repackaged its Victoria biscuit assortment last November, swapping its traditional black plastic tray for a cloudy plastic alternative which the brand said was fully recyclable, and downsizing the carboard outer to save 129 tonnes of card every year.