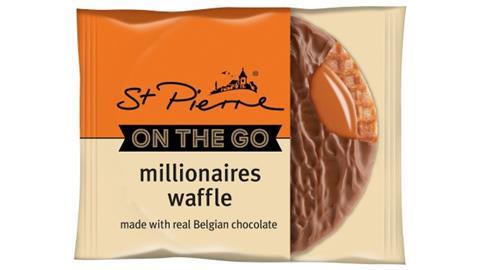 The Millionaires Waffle is made to a Dutch recipe, topped with caramel and coated in Belgian chocolate, with an rsp of £1.50.

“The Millionaires Waffle adds a new dimension to the already popular St Pierre on-the-go range, which we have seen grow significantly since its launch in 2018,” said Jeremy Gilboy, founder at St Pierre Groupe.

The food-to-go sector is predicted to reach £23.4bn in 2024, a 26% increase from 2019, which is double the 13% growth of the wider UK food and retail grocery market over the same period, according to insight firm IGD.

“As a trailblazing brand, our creative team has developed a product that not only tastes delicious but taps a number of consumer trends, while offering simple indulgence on-the-go,” Gilboy added.

The Millionaires Waffle is available in selected WHSmith Travel Stores now and is due to launch in a leading UK supermarket later this year.