Nabim map shows where to buy flour amid shortage 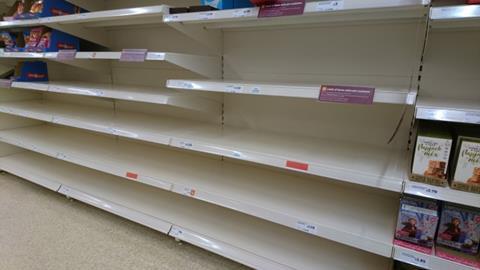 An online map has been published showing the public where to buy get hold of flour for home baking amid a national shortage of retail packs.

The National Association of British and Irish Millers (Nabim) has teamed up with retailers to create a nationwide “retail flour network” of sellers who can provide the public with bags over 3kg, which are normally supplied to caterers and businesses.

The resulting map means people can now search for local bakeries, wholesalers and supermarkets where the larger bags are available for the general public to buy.

It comes as smaller bags of flour have been out of stock in supermarkets as suppliers have struggled to keep up with demand, which has soared during the coronavirus outbreak. However, as Nabim pointed out, the issue was not with the amount of flour available, but the sudden surge in demand for smaller bags, which ordinarily made up just 4% of the flour market.

“The message to consumers is that flour is in plentiful supply, and there is now a convenient way of finding places that sell larger bags,” said Alex Waugh, Nabim director general.

“On the bright side, it’s good to see so many people rediscovering the joys of baking at home! Hopefully this will continue once the current coronavirus situation is resolved.”

Since the outbreak, Nabim has set up an early warning system, which enables its members to flag emerging problems before they become critical. This provides vital time for issues to be addressed both from the industry’s own resources and, where necessary, with the support of government or other parts of the food chain.