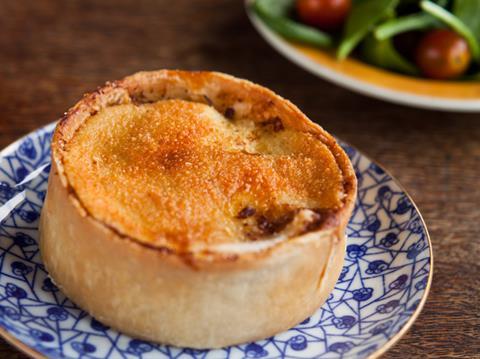 The Scotch pie is the UK’s most searched for pie online, according to research by Eat Great Meat.

The online butchers analysed a year’s worth of searches for different pies in Google Keywords and Trends to determine the UK’s favourite pie.

Scotch pies topped the table with 386,000 searches, representing 16.9% of all searches for pies across the UK over the past 12 months. Originating in Scotland, the pie traditionally contains mutton (although beef is commonly used now) and is a fan favourite at football games.

Vegan pie came in second with around half as many searches for the term, followed by vegetarian cottage pie, Cornish pasty and banoffee pie. Mince pies also made the top 10 (see table below). 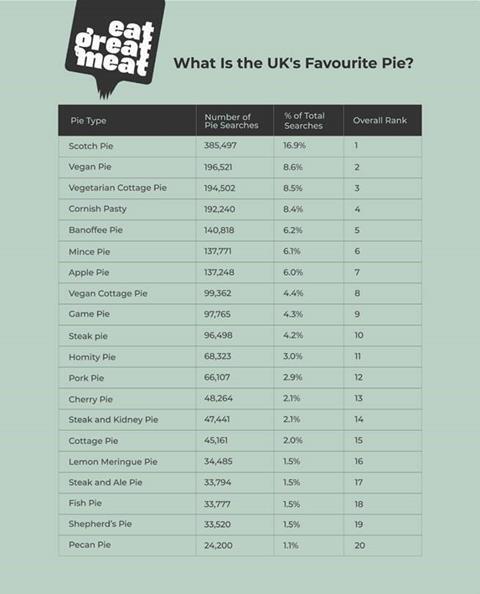 The results were revealed in time for British Pie Week which is taking place from 1-7 March. The annual celebration sees pie makers, butchers, and bakers across the nation undertake activities and promotions to celebrate the pastry-clad treats.

“These results are really interesting. The Scotch pie has seen a massive increase in demand since last year, when the cottage pie was named the UK’s favourite. I believe this is down to lockdown takeaway trends – this year’s favourite travels very well,” said Noel Bramall from Eat Great Meat.

“We have long known that this iconic Scottish superstar pie has a worldwide following but to have its premier position confirmed is proof of the UK’s love for tradition and quality baking,” he said.

“We would urge anyone based in Scotland who has searched for a Scotch Pie recently to pop down to their local baker or butcher and ask to try one for themselves, they are always in stock freshly made each day. If you live elsewhere in the UK, why not ask in your local shops if they would consider adding them to their product range.”

The analysis included regional breakdowns as well which revealed Northern Ireland’s most searched for pie was a banoffee one, while Devon’s top pie was the open-topped homity pie with potato, leek & onion filling all topped with cheese. Residents of Hull, meanwhile, favoured apple pies.

When it comes to side dishes, mash was by far the favourite in England, Wales, and Northern Ireland however the Scots prefer their pies to be served with a side of Bovril.