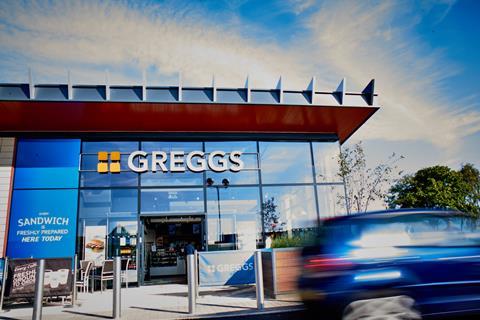 Sales at Greggs have soared by 27.1% in the first half of 2022, but profits are flat, its interim results revealed.

The flat profit outcome, according to Greggs, was primarily a result of the re-introduction of business rates, the increase in VAT and higher levels of cost inflation.

However, it has made ‘good progress’ on operational and strategic priorities. This includes opening 70 new shops taking its estate to 2,239 sites with a circa 150 net new shop goal for 2022 in total. This expansion has been focused away from traditional shopping areas and the business has sought to grow in catchments where it has traditionally been underrepresented, such as central London and rail hubs. Other notable openings included three drive-thru sites, of which there is a ‘growing pipeline’, an in-store café concept in Primark Birmingham and a shop in London’s Leicester Square.

Extending trading hours has also been a focus as the ‘evening daypart represents the largest segment of the food-to-go market by value, but is the area where Greggs currently has the lowest penetration’. Currently 300 shops now trade until at least 8pm with more shops expected to open later in the second half of the year.

“These results demonstrate the continued strength of the Greggs brand and demand for our great tasting, quality and value for money offering,” said Greggs CEO Roisin Currie.

“During the period we continued to make good progress with our strategic priorities, including expanding our shop estate and making Greggs more accessible to customers through extended trading hours and digital channels.”

Additional manufacturing and logistics capacity is also required for Greggs to achieve the ‘significant growth opportunity ahead’ with plans already in motion for this.

In the third quarter of 2022 it expects to commission a new pizza manufacturing line which is currently under construction at its Enfield manufacturing site. Meanwhile at the Balliol Park site in Newcastle preparatory works are underway ahead of adding a fourth line to extend the manufacturing capacity of its savoury products.

Greggs also appointed Matthew (Matt) Davies as an independent non-executive director and chair designate. He joins the board with immediate effect and will be made chair on 1 November 2022.

Davies is described as a ‘widely experienced’ retailer who has held CEO positions at Tesco UK & Ireland, Pets at Home, and Halfords. He is also chair of private equity-owned Hobbycraft, and is an operating partner at Advent International.

Commenting on the appointment, Ian Durant, current chair of Greggs, said: “Greggs has undergone a transformation over the past decade and I am proud to have contributed to its achievements as chair. Greggs has entered a new era, now under Roisin Currie’s leadership, and the business is in great shape with a clear strategy. I welcome Matt Davies as my successor as chair and wish him well.”